All-Aughts Team of the Decade 3B: Bill Mueller 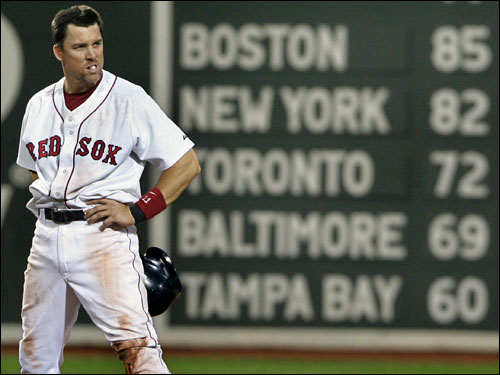 The hot corner was the the only significant debate I had at naming the All-Aughts Team of the Decade. Was it Bill Mueller or Mike Lowell?

On the face of it, how can you not have the 2007 World Series MVP on the Team of the Decade? But I’ve made my choice in Mueller. If you want Lowell on the team, check back after everyone is named and we do a Fire Brand vote on an honorable and dishonorable mention.

Mueller joined the Red Sox in 2003 as a free agent. You may recall how Mueller had to fight for playing time alongside Shea Hillenbrand, Jeremy Giambi and David Ortiz. Clearly, we know which two names won the battle. When Hillenbrand was dealt in May for Byung-Hyun Kim to come in as closer, Mueller was installed as the full-time third-baseman.

He enjoyed the best year of his career by far, winning a batting title by hitting .326/.398/.540 with 19 home runs and 45 doubles. His power output was the major story, as he had never exhibited this before. (He would keep up his power output the duration of his Boston tenure.)

It’s been reported that Manny Ramirez sat out the final game of the 2003 season to ensure that Mueller won the batting title (Man-Ram was one point behind).

Of course, I would be remiss in not mentioning Mueller’s greatest claim to fame: bopping two grand slams in one game from each side of the plate on July 29, 2003 — in consecutive at-bats from both sides of the plate. Ah, the benefits of being a switch-hitter. (Mueller would also hit a third home run in the game.) Mueller became the only player in history to have the grand-slam, opposite-sides in the same game event happen.

“Billy Ballgame” wasn’t without other notable contributions. We all remember Kevin Millar walking and Dave Roberts pinch-running in Game 4 of the 2004 ALCS… but the team needed Mueller to crank that bouncing single that just missed a sprawling Mariano Rivera.

Earlier in 2004, Mueller also contributed to the high-octane game between the Red Sox and Yankees that saw Jason Varitek shove his catcher’s mitt into Alex Rodriguez’s face. Tempers were high in the bottom ninth, with Boston down a run. On a 3-1 count, Mueller slammed a two-run shot off Rivera that won the game.

That’s part of the reason why Mueller nabs the spot ahead of Lowell. In the span of two seasons — two of the most important in the Red Sox’s history — Mueller was front and center. He was the best overall hitter on the Red Sox in 2003. In 2004, he ended the two Yankee games that every Sox fan will remember from ’04.

Nicknamed “The Professional,” Mueller was average defensively — he didn’t make a ton of mistakes, but he didn’t dazzle everyone with his play. What endeared him to Boston was a gritty attitude — a no-frills, unselfish player who laid out for every play. His acumen was also valued, and it’s served him well in his retirement. After inking a deal with the Dodgers following the 2005 seasons, Mueller’s knees completely broke down as everyone predicted. He currently is a special assistant to the Dodgers’ general manager, while also having served as hitting coach for the team.

I agonized over this decision for months. Mueller or Lowell? Lowell or Mueller? After thinking about it and looking up the numbers, I can say with full confidence that while Mike Lowell’s contributions to Boston are truly invaluable, Mueller was the one more deserving of the All-Aughts Team of the Decade nod.