Josh Beckett, Snitches, and What The Red Sox Need The Most 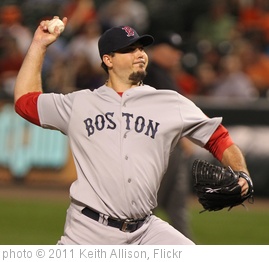 Considering the way things ended, it’s almost easy to forget that Josh Beckett was having the best year of his career. After 22 starts, his ERA stood at an exceptional 2.17 and his 9-4 record was not indicative of just how well he had pitched. That April 10th start against the Yankees comes to mind. With his team in desperate need of a win, Beckett went eight brilliant innings, not allowing a run and striking out ten. On June 15th he pitched a one-hitter against Tampa Bay. On July 17th, again against Tampa Bay, he went eight shutout innings, striking out six in a game the Red Sox won in 16 innings.

It was like 2007 all over again. Beckett was on a roll, dominating almost anyone he took the mound against. Boston was pacing the American League East for most of the summer. October baseball in Boston was an inevitability. Then September happened.

Over his last eight starts, Beckett went 4-3 with a 5.06 ERA. Worst of all, he lost his final two starts of the year to the Orioles, giving up twelve runs in 13.1 innings of work. The Red Sox missed the playoffs and the months ahead would present nothing but problems for Beckett and the pitching staff that he is the leader of.

Beckett’s final numbers were very solid despite those final eight starts. He finished with a career low 2.89 ERA (although his 3.57 FIP and .245 BABIP indicate that he was extremely lucky). But it was clear that he was gaining weight with every start, reportedly putting on 15-20 pounds between June and the end of the summer. And when the beer and fired chicken scandal broke out, it was Beckett that was at the center of it all.

Everyone had something to say. Media members questioned the authority in the front office and the manager. Fans wondered whether the team really cared at all. Even some players came out to the press immediately to retire. Josh Beckett said nothing. He let the fall, full of speculation and scapegoats, pass. He let others speak to the media, let his peers say the apologies. Yet, he remained at the center of the scandal.

Finally, he spoke to the media last week, He admitted to wrong doing in the clubhouse, calling his actions “lapses in judgement”. Sure, he didn’t seem all that sincere in his apology, but everyone knows he’s a bulldog, admitting he was wrong is never easy. He’s a bulldog and he’s stubborn, but he’s our stubborn bulldiog, he’s our ace.

And that’s why the comments he made today were so unsettling to read. In an interview with WEEI, Becket claimed that “Somebody made that stuff up, just like somebody made up that we were doing stuff…this is stupid. I don’t understand what the big deal is.” And now we’re back to square one. Now we’re back to million dollar pitchers claiming that they did nothing wrong, making themselves out to be victims.

Right now, I’m not too confident that Josh Beckett is any of those things. As mentioned earlier, there are many indications that he will regress this year (.245 BABIP last year, 3.5 FIP, 80.0% LOB%, etc.). Not to mention, it’s an even year, and he’s never good in even years. (I’m not kidding, look at this stats in even years, it’s kind of scary.) It shouldn’t surprise anyone to see Beckett either struggle with his performance or his health this year, or maybe even both.

I hope I’m wrong, I really do. Maybe Beckett will come out firing, maybe he will pitch 200 innings for the first time since 2009, maybe he will lead Boston to the playoffs, maybe I’m wrong. But the way he’s talking now isn’t giving me hope. The word “snitch” implies that there was something for said “snitch” to tattle on in the first place, so don’t say there was a snitch and then say that you weren’t doing anything wrong, because at this point we all know that you were.

The Red Sox need a leader, there is no question about that. Jon Lester appears ready to step up and be that man, but Beckett is now the veteran of this staff, the one who is supposed to set an example and pave the way for the rest of the team. He needs to do just that. He needs to put last year behind him. He needs to admit that he did something wrong and that he is ready to repent. We’re all ready to see that, the only question is, is he?