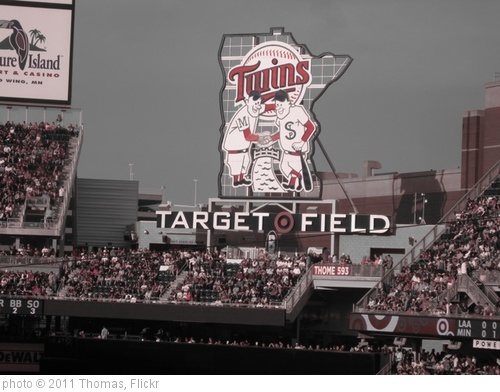 The Red Sox dragged their sorry butts out of town and will try to get healthy by taking on the 5-11 Minnesota Twins in the first game of a seven-game road trip. The Twins look like a carbon-copy of the Red Sox so far – the top of the order hitting well, the bottom of the order not, and lots of pitching problems.

Jason Marquis (matched up against Jon Lester) is making his second American League start having pitched in the Senior Circuit for all of his career. Having recovered from a freak fractured leg while pitching for Arizona last year, and dealing with his daughter’s car accident during spring training, Marquis barely pitched well enough for a win at Yankee Stadium. Marquis is not an overpowering pitcher. When he succeeds it’s because he keeps the ball on the ground (a career 50.4% GB rate) and in the park (11 HRs in 132 innings last year, 0.75 HR/9). Adrian Gonzalez has had some success against Marquis in the National League, going .316/.480./.474 with three doubles and six walks in 25 plate appearances against him.

Liam Hendriks (against Clay Buchholz) Gee, another Twins pitcher without overpowering stuff but gets by on command. Who woulda thunk it? Aussie Hendrix’s gaudy K/BB rates in the minors (9.75 at A ball, 8.25 at High A, 4.50 at AA and 10.00 at AAA) have been tempered upon reaching the majors (2.67 in four starts last year, 2.50 in two starts this season). Scouts laud the movement on Hendrix’s pitches, and he does seem to command them well. Hendrix’s 6.17 ERA in the majors in 2011 definitely doesn’t tell the true story of his ability (ERA lies again). Hendrix’s BABIP was an unlucky .347, his FIP was 4.10 and his xFIP was 3.66. Therefore, given similar raw stats in 2012, Hendrix should put up some decent advanced statistics (and maybe even a few wins) for the Twins in 2012.

Joe Mauer and Ryan Doumit are sharing the catching duties, while Mauer, Doumit, Chris Parmelee and Justin Morneau are all getting starts at first base.

RHP Scott Baker is on the 60-day DL and is out for the year, having had Tommy John surgery on his pitching elbow on April 17th. RHP Kyle Waldrop is on the 15-day DL with right elbow inflammation. RHP Nick Blackburn had been day-to-day with right shoulder inflammation but is expected to make his start on Tuesday night.

Do I have to write this section? I do? Okay then. This team is killing me. The bullpen sucks and it stinks and it sucks. Bobby V said that Daniel Bard is moving back to the bullpen for now, but they are putting him back into his setup role. Yet they are still scheduling him to start on Friday against the White Sox. I am Scott’s activated bile duct. Granted, Andrew Bailey‘s injury and Mark Melancon‘s bad start have made a bad situation worse, but Ben Cherington failed miserably in having major-league quality pitching ready to be called up from Pawtucket. There is some there (Ross Ohlendorf, Clayton Mortensen and (ugh) Andrew Miller) but it doesn’t fill one with much confidence. At least the Red Sox traded a bullpen arm in Michael Bowden for Marlon Byrd‘s three singles in 43 at bats. I will now attack myself with a pointed stick.

Many prognosticators thought that the Twins would have a difficult season and the Twins are fulfilling those expectations. At least Twins fans get to see Joe Mauer and Justin Morneau play with relative health. However, another season in the cellar of the American League Central may cause some Twins fan to take a drive to Fargo in a tan Oldsmobile Ciera to meet with a couple of shady characters to take care of things.