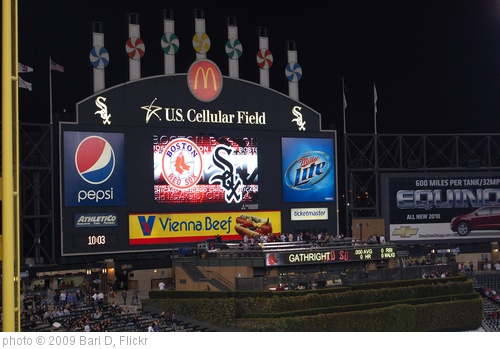 The Red Sox, having swept the hapless Minnesota Twins, continue their road trip by coming to Chicago’s South Side to take on the White Sox in a four-game series. The 10-8 White Sox are currently in a tie for first in the American League Central (with the Tigers and Indians). The Red Sox are 3.5 games back in the American League East but it could have been worse by now.

Philip Humber (against history and Felix Doubront) gets a chance to pull a Johnny Vander Meer against the Red Sox on Thursday night. Ok, Humber looks really good on the day of a start after a perfect game, but Humber has pitched pretty well since arriving on the South Side in 2011. Most importantly, Humber has reduced his walk rate, from 2.91 per 9 innings for the Royals in 2010 to 2.26 per 9 in 2011 (41 in 163 innings). Humber is also good at keeping the ball in the park, to an excellent rate of 7.7% in 2011.

Jake Peavy (facing Jon Lester) continues his comeback from injury, and he could have turned a statistical corner in 2011. In Peavy’s heyday with the Padres he always had excellent K rates (usually around 9.5 per 9 innings) but somewhat high walk rates (usually around 2.75 per 9 innings) and low batting average against (around .225). Ah young pitchers, always trying to strike everybody out. Having learned that strikeouts are fascist and ground balls are more democratic, Peavy’s K rate in 2011 was down to 7.66 per 9 innings but his walk rate was also down to 1.90 per 9, resulting in a K/BB rate of 3.96, the second highest of his career. Although Peavy had a 4.92 ERA in 2011 (we know that ERA lies), his FIP was 3.21 (what what WHAT!) and his SIERA was 3.53. If Peavy pitches similarly to 2011, his traditional statistics will improve and Ken Harrelson will talk about Peavy’s dramatic improvement. But we’ll know better.

RHP Jesse Crain is day-to-day with an oblique injury, but could be ready to pitch as soon as Thursday’s game. That’s it? That’s the only freakin’ injury they have?

Maybe Bobby V can’t get blood from a stone in the bullpen but he’s making the right moves in the batting lineup. Many people screamed bloody murder when Valentine made Mike Aviles the leadoff hitter. All Aviles has done is compiled a .328/.358/.594 triple slash line, a .409 wOBA and a 157 wRC. Granted, he could walk a little bit more for a leadoff hitter, and his .340 BABIP shows that these statistics are probably unsustainable, but let’s enjoy the production while he is giving it.

Here’s a short quiz: what player is 2nd in the majors in batting average, 3rd in OBP and wOBA, and 5th in wRC (despite only having 3 homers)? If you answered David Ortiz, you are correct. You win absolutely nothing, but you won nonetheless.

Everyone thought the Tigers would run away with the AL Central, but the White Sox are proving so far that they could be players. If Dunn continues being the old Adam Dunn, if Pawlie staves off Father Time, if the starting pitching can be solid, and if Ventura makes the right decision at closer, you could be hearing a lot of “Let’s Go, Go Go White Sox” on the South Side this year.