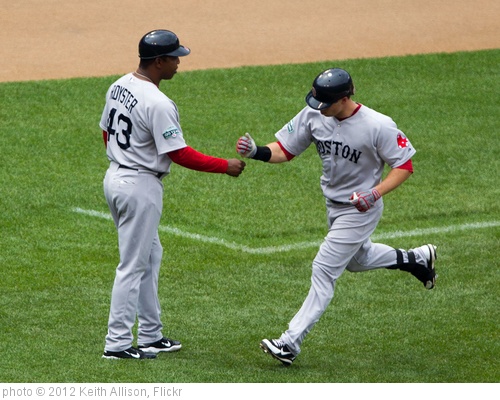 The crack of the bat was unmistakable. The ball was gone. Joe Blanton bowed his head, biting his lip as he let some saliva escape his mouth. The crowd roared, arms raised, drinks spilled. It’s rare that a player gives a curtain call after his first major league at bat, but twenty-seven year old Daniel Nava was preparing to do just that as he circled the bases. After all, he had just hit a grand slam on the first pitch he ever saw at the major league level.

A lifetime is made up of millions and millions of moments. To define a human being by only one is almost criminal. Yet, Daniel Nava is facing just that predicament as he continues his second extended stint with the Boston Red Sox, almost exactly two years after his first pitch grand slam.

Nava has had 85 plate appearances since being recalled from Pawtucket on May 10th, with Cody Ross and Darnell McDonald both headed to the disabled list, hitting .314/. 444/.477. with seven doubles, two home runs, a stolen base, and fifteen RBI’s.

It’s not a stretch to say that the extra year in the minor leagues has done Nava well. He looks like a more complete player than he did two years ago, whether it be his eye at the plate or his defensive play in the outfield. Obviously, his offensive line looks more impressive too, but remember, Nava started hot last time he was called up too, only to see his offense fizzle to a .242 average by the time the season was over. Perhaps more memorably, he never hit another homer.

Nava’s .320 BABIP isn’t absurdly high, so his average isn’t a result of a collection of lucky bounces. In fact, it looks fairly sustainable. The only thing that may be a product of luck is Nava’s HR/FB rate, which is over double (8.7%) his career rate of 4.1%. That being said, both numbers come from an extremely small sample size, so there’s not a ton of validity in analyzing either number. For all we know, Nava’s extra pop is a product of the extra year he spent in the minors.

Third, he is swinging and missing on much less pitches this year. His SwSr% (or the percentage of pitches thrown to a batter that are swung on and missed) is down to 5.2% this year, almost half of his 10.1% in 2010. All in all, it is clear that Nava has a much sharper eye at the plate than he did when he was recalled two years ago. It seems clear that the extra year he spent in the minors has done minor wonders to his approach in the batter’s box and his pitch recognition.

It seems hard to believe that Nava was not even in the outfield mix during Spring Training. Now he’s on the precipice of starting for the twenty-third straight game with the club. That being said, Nava is still no sure thing. When he came up in 2010, he surged to .291 average in first month, before hitting below .200 in his final two months. As stated, Nava seems due for a small bit of regression, but most of these numbers seem sustainable. His sample size is still extremely small though. It will be interesting to see what happens when Cody Ross, Jacoby Ellsbury, and Carl Crawford all return. Theoretically, Nava would seem to be out of a spot, but that’s a bridge to cross when the time comes, who knows how long Ellsbury and Crawford still have before they even start swinging the bat again, let alone play in a major league game.

After 2010, it seemed that Daniel Nava’s career had peaked with the very first pitch of his major league career. Well, despite every odd, he’s returned. And he’s fighting to become more than a footnote, more than a “Oh, isn’t that the kid who hit a grand slam on his first pitch?” in local conversations. Every swing he takes, every base he rounds, is fighting to erase that reputation, reworking a history that seemed all but written in stone. Lacing a 100 MPH pitch from MVP Justin Verlander for a three-run double is a good place to start, but to really change things, you’d imagine that Nava has to make an impact in another month, one that starts with an O. It’s been a few years since the Sox have gotten that chance. But then again, if anyone knows about waiting a few years for a chance, it’s Daniel Nava.