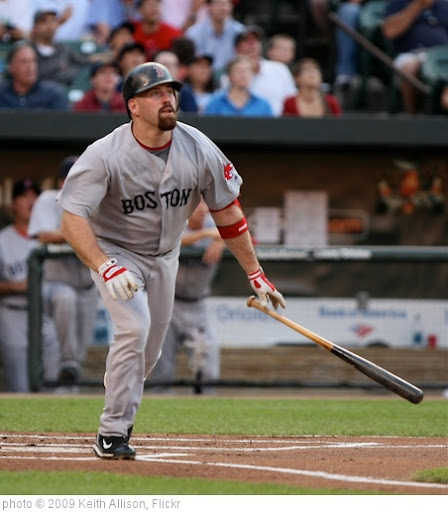 Ah, Kevin Youkilis.  So fiery….so gritty…so misunderstood.   And if you believe some of the reports that were released late last week, he’s so going to be traded at some point between now and the July 31st trading deadline.  On Friday, Danny Knobler of CBS Sports dropped this little bit of knowledge on a semi-unsuspecting baseball universe:

While Knobler didn’t divulge his source(s), it should be noted that he’s pretty well known for his accuracy when sharing MLB hot stove rumors.  That’s not to say he’s never wrong, but he’s far more reliable than a certain CBS colleague who has the reputation for being nothing more than Scott Boras’s personal mouth piece.  (**cough** Jon Heyman **cough**)

Given the potential implications Knobler’s intel could have on team chemistry and Youkilis’s overall trade value, Red Sox GM Ben Cherington was quick to combat the rumor:

“That’s inaccurate.  Some teams have checked in on him.  We haven’t told any teams we plan to trade him. It’s our job to listen if teams have interest.  He’s swinging the bat well since coming off the DL and [is] a big part of our team and lineup.”

While I don’t think Cherington’s statement is completely inaccurate, it comes across as nothing more than “damage control.”  I don’t doubt teams are calling daily asking about Youk’s availability.  After a winter where Aramis Ramirez was the top third base free agent solution, a lot of teams were left wanting.

Still, if the Red Sox aren’t actively shopping Youkilis, they will be very soon.  Although the Red Sox are suffering from a serious case of the injury bug right now (especially in the outfield), antibodies in the form of All-Star caliber players are soon on the way.  Jacoby Ellsbury, Carl Crawford, and Cody Ross are all expected to return to the fold at some point over the next eight weeks.  Until they do, the Red Sox’s major league roster is pretty shallow.

To be fair, the shallowness of the Red Sox major league roster has actually played well into their hands; especially since Youk’s return from the disabled list.  In fact, it allowed the club to avoid making a tough roster move:  sending rookie sensation, Will Middlebrooks (.384 wOBA in 106 PAs), back to AAA to make room for the grizzled, goatee cloaked veteran.  Instead, as a result of creative positioning, they’ve been able to play both players daily.  By moving first baseman Adrian Gonzalez to right field (defensive metrics be damned!), shifting Youkilis across the diamond from first to third, and allowing Middlebrooks to remain at third; the Red Sox have put themselves in a position to maximize their offensive output.

Of course, this is only a short term solution.  As soon as one of the aforementioned outfielders returns from the DL, the Red Sox will be forced to either bench, trade, or demote someone.  With Adrian Gonzalez signed to a seven year $154M contract, it’s pretty clear he won’t be the one losing his job.  If Middlebrooks continues to hit as well as he has, it’ll become increasingly difficult to justify his demotion.  That leaves one option:  trade Kevin Youkilis, one of our last connections to the fateful 2004 championship team.

So who might be in the market for Youkilis’s services?  Let’s take a look at a few of the options:

Arizona Diamondbacks – Currently the Diamondbacks sit in third place in the NL West at 25-29, eight games behind the division leading Dodgers.  With the recent advent of the second Wild Card, they’re still in the thick of the playoff race despite; only six games back.  As of today, they have the immortal 31 year old Ryan Roberts holding down the fort batting .220/.281/.320.  Yikes!  With Chris Young back in the fold; Justin Upton likely (hopefully) to turn it around at the plate; and Stephen Drew on the mend, Kevin Youkilis could be the piece they D’Backs need to gear up for a serious playoff run.

Chicago White Sox – It’s safe to say that most of us assumed the Detroit Tigers, not the Chicago White Sox, would be sitting pretty in first place come early June.  Well, we were wrong.  Very, very wrong.  The Tigers are languishing five games back, and even the mighty Justin Verlander can’t stop their slide.  The White Sox have smartly taken advantage by combining a powerful offensive attack (Paul Konerko and Adam Dunn) with solid pitching (Jake Peavy and Chris Sale).  While Alexei Ramirez‘s struggles are disturbing, third base has been a much bigger black hole for the White Sox.  Brent Morel (.177/.225/.195), Eduardo Escobar (.178/.275/.244), and Orlando Hudson (.184/.295/.289) have been picking up the lion’s share of the plate appearances.  Clearly, they’re in serious need of an offensive upgrade at the hot corner.  Youkilis would be a very interesting pickup.

Cincinnati Reds – Despite their division rival (Cardinals) having the NL’s best run differential, the Reds have built a three game lead in the NL Central.  Their pitching, primarily their bullpen, has been superb  this season.  Their offense, save for Joey Votto and Jay Bruce, has been surprisingly mediocre.  One of the biggest offenders has been former All-Star Scott Rolen, who has been plagued by shoulder injuries all season (and the last seven years).  Through 101 plate appearances, Rolen’s produced a dismal .174/.238/.304 slash line that leave little to be desired.  For a team battling a potential titan in St. Louis, they’ll need some a reinforcement at the hot corner in order to stay serious contenders.

Los Angeles Dodgers – On paper, the Dodgers should probably run away with the National League West.  With Matt Kemp, Andre Ethier, and Clayton Kershaw on their marquee, they boast three of the brightest young stars in the game.  To date, they’re three games up on the San Francisco Giants, their most hated rival.  Considering they’ve been without Kemp, the reigning NL MVP, for 18 games, it’s hard to be too disappointed with the placement in the standings.  Still, there’s one giant black mark on the roster they’ve yet to solve–third base.  Currently, the woefully underwhelming Juan Uribe (.250/.302/.338) and the delightfully scrappy (but not very talented) Adam Kennedy (.213/.316/.275) have been manning the hot corner for Mattingly’s Dodgers.  That won’t get it done long-term.  A healthy and productive Youkilis would help change the complexion of the lineup by adding greater depth and security should someone be striken with injury.

Philadelphia Phillies – All things considered, the Phillies are doing a lot better than I thought they’d be right now.  Ryan Howard and Chase Utley haven’t played a game yet–and may not for a few months.  Roy Halladay is on the shelf with an injury to his right latissimus.  Cliff Lee and Vance Worley have all missed time due to injury.  Somehow, they’re a game above .500, and only 3.5 games back in the NL East.  And unlike the four above named teams, the Phillies have a solid, albeit unspectacular option, at third in Placido Polanco.  What they don’t have is an acceptable replacement for Utley.  Instead, they have Freddy Galvis; a light hitting but decent defensive player.  If Utley ends up missing the entire season, the Phillies may decide to trade for a third baseman, and shift Polanco over to second to split duties with Galvis.  With their offense struggling, Youk might be just the kind of bat they need to help supplement their needs until Howard and Utley return.