Sox Play It Safe On Day One Of The Draft 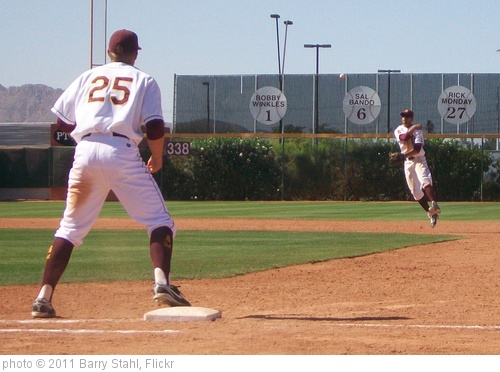 To begin with, this article will mean nothing in two years. In fact, in as few as six months, all of these words could be rendered rather meaningless. That’s probably not the best way to inspire you to read further, but when addressing the MLB draft, it’s best to proceed with caution. Most of what you are about to read is speculation, the collective thoughts of many scouts, who do their best to project these amateur players at the major league level, but often miss.

Second, don’t assume that the picks made today reflect the way the front office feels about the current team on the field. Most of the time, teams draft the best overall player on the available on the board regardless of position. The fact that the Red Sox took a shortstop with their first pick today does not mean that Mike Aviles is on the trading block, or that Ben Cherrington is unhappy with the way that Jose Iglesias has developed. This isn’t the NFL or the NBA or even the NHL. Players chosen today still have a few years ahead of them before they officially join the big league club.

Now, with all of that being said, let’s breakdown Boston’s first day in the draft.

Marrero entered this season as a consensus top-10 pick before seeing a regression in his offensive stats that many have attributed to a high sprain in his ankle. He doesn’t hit for power, but scouts say that his high-contact rates and good bat speed project him as a decent big league bat. But what Marrero is known for is his defense. While not on the level of Jose Iglesias, his glove has caught the eye of many. The 21-year old projects to stay at shortstop. He hit .397 as a freshman, .318 as a sophomore and .284 this year. Were it not for that ankle sprain, he would have gone much higher. The sox have a history of drafting injured players who have performed well before said injury, as recently as Jackie Bradley last year.

Johnson is a stocky left-hander, coming in at 6’3 and 235 pounds. His ceiling is a 3rd or 4th pitcher in a starting rotation, but the consensus seems to be that he’s a very safe pick. He made 16 starts for Florida this year, going 8-4 with a 3.56 ERA. He struck out 68 over 86 innings, while walking only 15. He’s also a good first base prospect, but the Sox seem committed to him as a starting pitcher. His fastball tops out at about 92 MPH right now, but he has a strong repertoire, also featuring a plus curveball, and a decent slider and changeup. Not a flashy pick, but he seems a safe bet to crack the starting rotation down the road.

Light pitched 101 innings last year for Monmouth, going 8-3 with a 2.40 ERA. He struck out 102 and walked only 16, allowing 84 hits. He’s tall at 6’6 and weighs 215 pounds. Currently, he throws a high velocity fastball that can hit 96 MPH. He also throws a slider and a changeup, but they are not nearly as strong as his fastball. If he works on developing secondary pitching, some believe that he can succeed as a starter. That being said, he has the makeup of a high-leverage reliever.

Reactions to Boston’s first day at the draft have been mixed. Many are upset that Cherrington did not select players with much upside, instead siding for “safe” picks, players that don’t have too high of ceilings, but don’t have much room to be busts either. Theo Epstein consistently drafted players like this, often using Boston’s financial muscle to draft talented high school players previously committed to colleges. Of course, this year MLB implemented a cap on the amount of money teams can spend on bonus payments, based on the number of picks they have. The strategy that netted Boston Casey Kelly, Blake Swihart, and many others simply won’t be as easy anymore.

That’s not to say the Sox won’t follow tradition more closely tomorrow, but it still was strange to see them take three college players in the first round. The pick that makes the least sense to me is Johnson. I don’t see much sense in drafting a player that you know will only amount to a third starter at best. There are plenty of those arms to be had for cheap in free agency and through small trades every year. Why not spend the pick on a player that has the potential to be an ace, even if there is a bigger risk of them burning out? Sure, it never hurts to have quality pitching depth, but in the first round, picking players with the highest potential always seems the best route to go. That’s what the Astro’s did with the first pick, bypassing Mark Appel, the consensus first round pick in almost every mock draft, to take arguably the best talent on the board in Carlos Correa. Even if he doesn’t pan out, the potential of a legitimate all-star should be enough to lure teams. There’s no way you can tell me that Johnson was the best overall player on the board at 31, and it seems a bit of a waste not to always take the best player, even if the alternative route is safer.

So while Boston’s front office took a bit of a different strategy this year, one criticized by certain circles, they still appear to have made three decent picks. Again, only time will tell just how decent they are, and that’s the tough thing about the MLB draft. There are still plenty of rounds to go, and who knows, maybe Cherrington got his safe picks out of the way today. Still plenty of talent out there, it’s up to the Red Sox to find it.