Taking An Early Look At The Trade Deadline 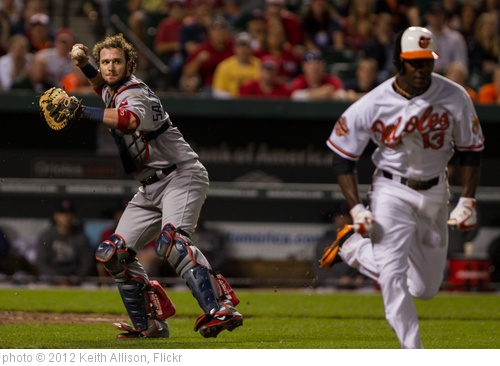 After last night’s tough loss in Miami, the Red Sox sit a full seven games out of first place. Of course, if last season taught us anything, it’s that as long as a team is not mathematically eliminated, it’s never too late to make a run. Yet, it’s hard to look at this team and have confidence in them making up a double defeceit in the division, if they slip that far.

With the trade deadline about six weeks away, Boston is shaping up to be one of the more interesting teams heading into the final day of July. The next few weeks will decide whether this team will be a buyer or a seller, but either one provides interesting implications for the future of the franchise.

The really fascinating thing about the state of the team right now is that due to injuries, it’s hard to tell exactly what they need to take their performance to an elite level. The most glaring deficiency seems to be in the starting rotation. Josh Beckett and Felix Doubront have both been consistent at best, but besides from that it’s really been a grab bag. Sure, Clay Buchholz looks like he’s rounding into form, and Lester has shown flashes of brilliance, but neither has been reliable.

Looking at the starting pitching market, it appears that the prize will be Zack Greinke. Of course, he’s going to come with a huge price tag, not to mention he’s going to demand a monster deal when he hits free agency at the end of the year. While he would be a huge addition to the rotation, I’m not sure it’s worth the prospects or the contract it would take. Matt Garza is another player who could be interesting, especially since he’s performed well in the AL East before. The worry there would be that conducting a deal with Theo would be hard to do, considering he drafted pretty much the entire farm system. That being said, everyone had the same comments about Jed Hoyer in regards to the Adrian Gonzalez trade, and that actually got done pretty easily all things considered. Garza would certainly help the rotation if he came for the right price. Some other starters to consider would be Garza’s rotation mate Ryan Dempster, who is actually having a very solid year, Wandy Rodriguez of the Astro’s, Brandon McCarthy on the A’s, and John Lannon on the Nationals. All things considered, I think Garza and Dempster would be the best two players to garget.

At this point, it seems a foregone conclusion that Kevin Youkilis will be dealt. Will Middlebrooks has proven that he belongs in the majors, and at this point, it’s hard to justify him spending any time on the bench. Boston is in a tough situation here because the only way to get good value for Youkilis is to play him enough that he can prove that he’d be worth a solid piece in a trade. Yet, the more time Middlebrooks spends on the bench, the less time he sees on the field, and the rustier he becomes. It may be in the Red Sox best interest just to send Middlebrooks down for now, just so Youk can get enough time to prove his worth. If he really doesn’t perform, then they just call Middlebrooks back up.

Speaking of tough situations, Boston’s front office has some decisions to be made by the end of this year that could impact what goes down at the trade deadline. Catcher is the position that sticks out in particular. Ryan Lavarnway is hitting very well at Pawtucket. Yet, with Jarrod Saltalamacchia having the best season of his career, it seems unlikely that Lavarnway will get the call to the majors any time soon. So, do the Sox try and extend Salty and package Lavarnway as a key piece in a blockbuster deal? Again, a very tough position.

As I mentioned earlier, Boston certainly has a surplus at many positions. Just look at the outfield. Marlon Byrd was already optioned down, Cody Ross is very close to returning, it seems like Carl Crawford is well on his way, and Ryan Kalish is killing the ball so far in his minor league rehab assignment. Assuming that Jacoby Ellsbury will be back by the end of the season, the outfield is the definition of a log jam. Daniel Nava and Scott Podsednik have both been very good in their time in the majors so far, and Ryan Sweeney has been playing well as a regular. So you’re looking at nine players for four (maybe five) spots. Obviously, Podsednik, McDonald, and Nava seem to be the odd men out here, but all three of them could conceivably be part of trades. It would be a shame to see Kalish dealt, but like Lavarnway, he could be the centerpiece of a blockbuster deal.

Like the outfield, the bullpen is full of surplus parts. Mark Melancon is back in the majors after dominating as Pawtucket’s closer, but that still leaves pitchers like Junichi Tazawa and Alex Wilson stranded in the minors when they could easily be helping out in a major league pen. This is all without mentioning the fact that it’s starting to look like Andrew Bailey will be back before the All-Start break.

With players like Matt Barnes, Ryan Lavarnway, Jose Iglesias, Jackie Bradley, Alex Wilson, Junichi Tazawa, and Xander Bogaerts all in the minor leagues, the Sox certainly have the chips to conduct a blockbuster trade. The question is, do they really want to? They just traded their top prospects for Adrian Gonzalez, and making a similar move two years later seems to be unwise. But the deadline is still six weeks away, just because Zack Greinke is the only huge name out there right now, you can certainly expect to see a few surprises join the list by the time mid-July rolls around. One way or the other, Boston will be active at the deadline. Whether that means selling players like Youkilis, Mike Aviles, Cody Ross, maybe even Jarrod Saltalamacchia, or trying to acquire an All-star all depends on the teams performance over the next few weeks. Of course, if they keep playing the way they have been over the last eight games, the answer seems obvious.