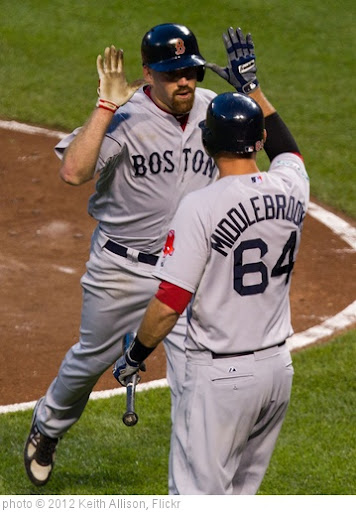 Whenever I’m at Fenway Park, my eyes can’t help but wander to the second level of seats in right field, where the retired numbers hang. I always think of the current team, and wonder which players, if any, will someday have their number proudly displayed with other Red Sox legends. For what seems like forever now, I assumed Kevin Youkilis would be on of those players.

Nine years with the same franchise will instill that type of confidence. Two World Series rings will only increase it.

But on Sunday afternoon, Kevin Youkilis had his last at bat with the Boston Red Sox. In a move that should surprise no one that has been following Boston all season, they shipped him to the Chicago White Sox for young pitcher Zach Stewart and ultra-utility man Brent Lillibridge.

For those complaining about the trade, as valuable as Youkilis has been for the Red Sox over the course of his major league career, he’s still only hitting .233 this year, with four home runs, and a stint on the disabled list. The sox weren’t going to do much better than what they came with, Sure, Matt Thornton would have been nice, or maybe even a piece from a third team, but all things considered, the fact that Will Middlebrooks and Adrian Gonzalez can now play their natural positions, makes the trade worth it.

The thing I’ll miss most about Youkilis is his stance. Hearing every national television announcer say something along the lines of, “Now, don’t try that at home kids.” It was always a surprise to these announcers, but to someone who watched nearly every game that Youk played with the Sox, it almost grew into an inside joke.

It’s sad the way the game works, but eventually, every player’s time comes to an end. Sometimes you’re ready for it, sometimes you’re not. It’s hard to say goodbye when you’re not prepared to. Even though this trade was something that many were preparing for the last week, or even month in some circles, but by the time Youkilis was heading back to the dugout in the seventh inning, it was hard not to get emotional.

There’s not much statistical evidence backing this statements, in fact there’s none at all, but I’ll still say this: the Chicago White Sox will not regret this trade. In Youkilis, they have a capable third baseman, for a team that was ranked last in literally every major offensive category out of the third base position, but they have a player who cares about the game.  A player who brings heart, intensity, and passion to almost every pitch.

Sure, he may be getting old, and for the last two and a half years now, it’s been hard to keep him on the field. But one thing’s for certain, when he’s on the field, there’s not many other players you would take over him.

Will Middlebrooks is the future. Over the past week it’s been almost impossible to even get him to make an out. He’s been on a ridiculous tear. So, it’s with a heavy heart we say goodbye to Kevin Youkilis, but it’s not without good reason.

For a long time, it seemed like he’d be here forever. It would have been nice if it worked out like that, but baseball, like life, doesn’t always work out the way you plan it to.

The number 20 will probably never be retired at Fenway Park. Sure, there will be Kevin Youkilis appreciation days, but he won’t be remembered the way David Ortz, Jason Varitek, and Tim Wakefield will be. That’s a shame because he’s meant just about the same to this team as those three have over the past decade. After all, now that he’s gone, Ortiz is the only member of the ’04 squad left.

Best of luck to Youk in Chicago. I have a feeling he’s going to make the White Sox season. It won’t quite be the same without him.