The Best Designated Hitter of All-Time? 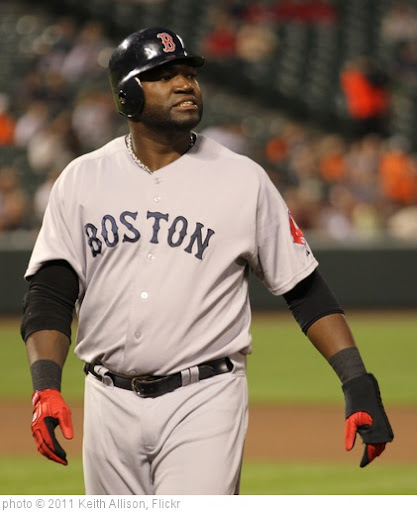 On Sunday afternoon, a couple of friends and I went to Baltimore to watch the Nationals play the Orioles at Camden Yards.  Despite it being a low scoring, it was pretty exciting game, nevertheless.  Any time you can watch young stars like Bryce Harper, Matt Wieters, Ryan Zimmerman, and Adam Jones play, it’s going to be a fun game.

All of that said, the highlight of the day was not the game itself.  Instead, it was the conversations that ensued as we watched.  We covered a variety of topics that ranged from steroids to the Chicago Cubs, the Hall of Fame, baseball memorabilia, and finally the designated hitter.  Toward the end of the game, my friend Dave (a Cubs fan) asked a rather interesting question:  “Is David Ortiz is the greatest designated hitter in the history of baseball?”  He thought yes, and my friend Kevin (a Red Sox fan) wholeheartedly agreed.  I provided the dissenting opinion, firmly coming down on the side of Edgar Martinez.

Trying to sell Martinez over Ortiz as the best DH in history to a group of Red Sox fans (such as yourself) is a pretty hard sell.  We remember Ortiz’s years of dominance (2003-2007), which was followed by an unexpected three year resurgence of greatness (2010-2012).  We remember two October championship runs, all of the clutch hits, and the fear he struck into the hearts of pitchers.  Ortiz certainly has an interesting case, at the very least on a purely on the subjective level.

Martinez, on the other hand, nearly lacks that pedigree entirely.  The furthest his Mariners ever came to a deep playoff run came in 1995 and 2001 when they lost in the ALCS to the Indians and Yankees respectively.  The only clutch hit of note was “The Double” that forced a Game 5 in the 1995 ALDS against the Yankees.*  Furthermore, Martinez was rarely considered to be the best hitter on his own team–not that this was his fault.  These kinds of things happen when Ken Griffey, Jr., Alex Rodriguez, and Ichiro Suzuki are your teammates at various points in your career.  Still, he was rarely considered to be a superstar, which hurts his case from a narrative standpoint.

* To be fair, this was a pretty momentous hit in terms of Seattle baseball.  It not only served as a catalyst in a tremendous playoff series comeback, but it also helped save baseball in the Emerald City.  Prior to that moment, residents were against the idea of public funding for a new stadium.  After “The Double,” public sentiment drastically changed; thus leading the way to Safeco Field being built.

Let’s step away from the narrative for a second, and look at the two from a statistical angle.  How do they stack up in terms of their primary statistics?

It’s important to keep in mind that Martinez played an additional 200 games and racked up an additional 1100 plate appearances.  This actually helps Ortiz’s case in terms of counting stats as he can keep adding to his totals.  Ortiz has a clear advantage in terms of home runs and RBI, and will likely pass Martinez in doubles and runs scored sometime during the 2013 season.  Martinez’s only edge is in his batting average.

Interestingly enough, advanced statistics don’t support the narrative that the superstar, Ortiz, was a better player than the (supposedly) complimentary player, Martinez.   Using a few metrics like weighted on-base average (wOBA), weighted runs created plus (wRC+), and Wins Above Replacement (fWAR), we can begin to see a very different picture.

Let’s be clear.  Both players were elite hitters.  Still, despite Ortiz’s better counting stats, Martinez’s career offensive output was 12% better than Ortiz’s.  While that might not seem like much, 12% is pretty significant when you consider the large samples in which we’re dealing.  Just to put it in context, let’s look at each player’s ten best seasons in terms of wOBA (in which they qualified for the batting title):

Clearly, Martinez bests Ortiz in this category.  In fact, it’s not even close.  Martinez’s worst season was still better than Ortiz’s threeworst seasons.  Additionally, he put together seven seasons with wOBAs over .420 versus two by Ortiz.  Those are some pretty jaw dropping statistics.

What about era, though?  Martinez had the luxury of playing most of his career during the height of the so-called steroid era, whereas Ortiz primarily caught the end of it.  Certainly, there must be some statistical inflation, right?  Well, let’s take a look at wRC+, which is similar to OPS + in terms of adjusting for era, park, and league factors.  Here are each player’s top ten seasons in this category:

Even if we were to adjust for multiple factors in hopes of normalizing wOBA, Martinez’s ten best seasons still come out on top.  To be fair though, the top five seasons are pretty closely aligned.  It’s really in the bottom three seasons for Ortiz where we really begin to see the differentiation between the two hitters.

Finally, let’s look at value.  For the purpose of this exercise, I’m using Fangraphs version of WAR (fWAR).  You can use Baseball-Reference’s version (rWAR) or Baseball Prospectus’s WARP if you prefer, but the conclusion will ultimately come out the same.  Here’s the breakdown for each player.  (Again only seasons where the player qualified for the batting title will be included.)

Let me start out by saying, wow.  Martinez had one 7-win season, five 6-win seasons, and three 5-win seasons!  What makes this all the more impressive is that seven of the above listed seasons occurred when he was primarily a DH.*  Ortiz also has provided some incredibly strong seasons as well, producing three at the 5-win plus level; but he didn’t provide anywhere near the kind of value Martinez did.

When you look beyond the narrative, the memories, and the counting stats, you start to see a very different picture of which designated hitter really was better.  Martinez was an elite hitter who happened to play on the wrong coast, and was “stuck” on a team full of major superstars.  As a result, his unbelievable career has been unfortunately minimized.  David Ortiz’s career has been great, and I look forward to seeing how he finishes out his career.  That said, his career pales in comparison to Edgar Martinez.