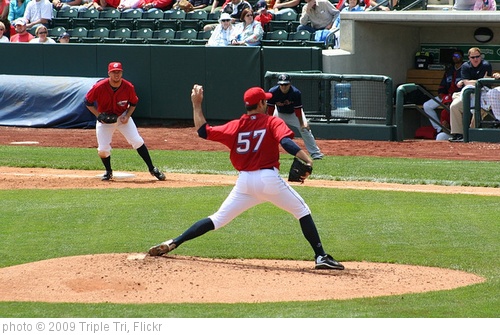 It’s been mentioned pretty much everywhere, but this Boston Red Sox team is about to change. With six starting pitchers, nine outfielders, and plenty of depth in the minors, something has to give. With that being said, let’s take a quick look at how some of Boston’s top prospects are faring down on the farm.

Jackie Bradley: We didn’t mention him last week, and that was a mistake. The twenty-two year old outfielder is doing some incredible things since being promoted to the double-A Portland Sea Dogs. In 38 at bats, he has a .368 average, a .442 OBP, four doubles, a home run, a .968 OPS, and two stolen bases. Rather remarkable. The sox drafted him in the first round last year, so there were certainly high expectations for Bradley, but it’s safe to say that no one was predicting this performance. He’s quickly becoming one of, if not the best, prospect in Boston’s system.

Ryan Lavarnway: The Pawtucket catcher has been on a tear lately. His average is all the way up to .319 after a torrid two weeks. He only has seven homers, so his power is definitely down after last year’s surge. No one is complaining about the .403 OBP and .888 OPS though. The sox have a pretty interesting decision to make here in the coming months. Jarrod Saltalamachhia has arguably been the second best bat in the lineup this season behind David Ortiz, and if he continues to hit well in the second half, the Sox would seem poised to keep him around for a while. There’s not much left for Lavarnway to learn in the minors. With his numbers being what they are, it may be smart for Boston to trade him now, when his value is the highest it’s ever been.

Brandon Workman: Not much has been made of Workman, a second round pick in the 2010 draft, but he’s having a very solid year in Single-A. He leads the Salem Sox with a 3.06 ERA. Although he projects as a reliever at the major league level, he’s been starting for Salem. He has 62 strikeouts in 70 innings pitched, and has compiled a 5-4 record. Workman won’t light up the radar gun, and with a slew of other prospects making headlines Workman isn’t getting much notice, but he could end up being a solid reliever for the Sox.

Jose Iglesias: Same old story. .254 average. 5 extra base hits in 181 at bats. It’s hard to believe that Iglesias was actually competing for the starting spot on the major league team at the beginning of Spring Training. Needless to say, a .598 OPS is not going to cut it in the majors. It will be interesting to see where Iglesias ends up in the next year, but it’s safe to say that he’s no longer the star of Boston’s farm, he may not even be the best short stop.

Matt Barnes: He had a rough start this week, exiting after throwing over 30 pitches in the first inning, and surrendering three runs. Barnes has earned a bad start though. He still has a 2.66 ERA since moving up to Salem, and 56 strikeouts in 50 innings. You’re looking at Boston’s top prospect.