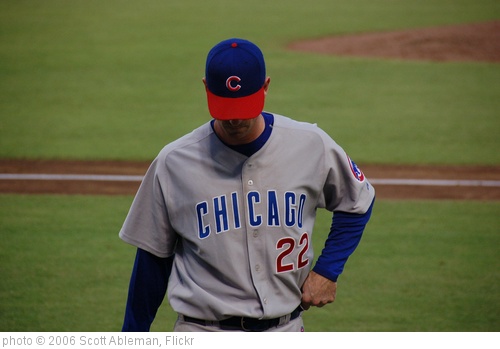 It’s easy to play the “What if?” game with Pawtucket’s Mark Prior, who signed a minor-league contract with Boston on May 2.

For example, what if Prior:

* In the midst of the 2003 season with the Cubs (he finished 18-6 with a 2.43 ERA with 245 strikeouts in 211 1/3 innings and placed third in the National League Cy Young Award voting), had not suffered a right shoulder injury which prevented him from pitching in the All-Star Game?
* Had not battled an Achilles’ tendon injury in 2004 which limited him to 21 starts (6-4, 4.02 ERA)?
* Avoided a line drive which fractured his right elbow and ended a 2005 season when he was 11-7 with a 3.67 ERA?
*Did not incur shoulder tendinitis in 2006 which led to a dismal 1-7 record and a 7.21 ERA in only nine starts?
* After signing a one-year contract with the Cubs prior to the 2007 season, did not undergo right shoulder surgery which forced him to miss all of that year plus 2008 and 2009?
* Prior had not failed to impress scouts during a June, 2010 workout at USC – which led to him signing with Orange County of the independent Golden Baseball League in August?
* Another groin injury had not limited him to 11 appearances with three Yankees’ farm teams in 2011?

“For me, I respect the fact that health is a major issue with me. It could turn on the drop of a dime. And I know that. But I also know I can get guys out. I can still perform. I can still compete at a high level.

“I think that’s what keeps drawing me back and wanting to play,” continued Prior, “and having one more shot at getting to the big leagues and having another shot at trying to win a championship somewhere.”

Lest we forget, Prior was the ace of the Cubs team which came THIS CLOSE to winning the 2003 NLCS. In fact, he was on the mound and in the midst of a three-hit shutout in the eighth inning of Game 6 against the Marlins in what became known as the infamous “Bartman Game.”

Before landing on the D.L. with the PawSox, Prior made seven relief appearances encompassing nine innings and had recorded one save, a 3.00 ERA, eight walks and 20 strikeouts.

“He hasn’t overcome anything yet,” said PawSox pitching coach Rich Sauveur. “You have to remember he’s in Triple-A right now. His goal, obviously, is to get back to the big leagues. When he gets there, you can say he’s overcome something. Right now, he’s still working on everything.

“He had that groin injury last season that held him out of a lot of innings so he’s a work in progress.”

That being said, Sauveur has seen enough of Prior to be impressed. “He’s got a live fastball … 90, 91, 92,” he said. “His curveball’s good. If you look at his strikeouts, obviously they’re not putting the ball in play as much as they could. So, he’s striking out people. He’s got stuff to get people out.

“The command wasn’t there in his last outing (on June 21 versus Syracuse, Prior allowed one run in one inning due in large part to three walks). I want him to be consistently down in the zone. He’s not the flamethrower he was that could get out people just with a fastball. He’s going to need to locate a pitch here and there.”

Locating pitches and throwing fastballs that lit up radar guns were the least of Prior’s problems in 2003 – so much so that he almost made pitching look easy.

“I think that everybody who plays the game knows that nothing’s easy,” countered Prior. “Things can change really fast. We had a good team that year with a lot of good guys and a veteran presence. We had a lot of fun.

“It was one of those years when you look back you have a lot of fond memories.”

One memory Prior disdains involved his being labeled a phenom when he made the Cubs in 2002 after being drafted second overall the previous year. “Labels, from the outside, are what they are,” he said. “For me, I put a lot of pressure on myself to go out there and perform. I try first and foremost just to go out there and have a good outing and give my team a chance to win ballgames.

“That the way I was raised and the way I played in college (USC) as well as early on in my pro career. It’s the same way now even as a reliever. Just go out there regardless if we’re ahead or behind, do my job and give my team a chance to win ballgames. Ultimately, that’s what’s important.”

In retrospect, what also was important to Prior was his friendship with fellow Southern Californian Dave Finley – the Red Sox’ director of personnel. Prior to spring training (no pun intended) Prior texted Finley that his groin was healed and that he wanted to continue pitching perhaps again in an independent league. Finley arranged for Prior to throw a bullpen session, which led to a stint in extended spring training and, eventually, the offer of a minor-league contract.

“I wouldn’t say the odds are against him because, at 31, there are plenty of years left,” said Sauveur. “Since he’s been here, he’s shown me that he’s healthy (Prior’s current injury is considered short-term) and could be called upon at any moment. Right now, everything’s going well.

“Overall, I think he’s done a very nice job for us. He just needs to be more consistent.”

And should that transpire? “What the organization’s plans for him are still up in the air,” said Sauveur. “They’re still telling us when they want him to pitch. We’re just going to do what they want. We’re trying to get him some plus innings on the mound so we can get some positive feedback that we can send back to the staff up there.

Prior, for his part, is concentrating on the present as opposed to the future. “A this point in my career, I legitimately take it day-by-day,” he said. “I worry about what I have to do today and worry about going out and preparing myself for today’s game.

“I’m having a good time with these guys and, yes, I want to get to the big leagues. I know I can still compete at that level. But, for me, it’s about waking up and preparing to do my job and not worry about playing ‘What if games?’ and playing scenarios. That’s a tough way to go out there instead of focusing on your job.”