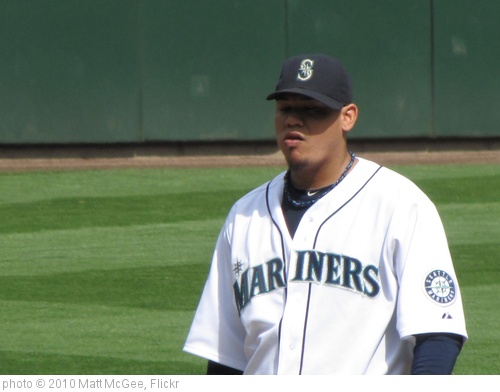 I’m not going to waste any time today.  On to the mailbag!

With Jon Lester not performing like the ace we expected, do you see the Sox making a bid for a proven ace? Zack Greinke or King Felix are the two I would love to see GM Ben Cherington pursue. I would be willing to part with Ellsbury for one of the two. Kalish is the center fielder of the future in Boston.

Red Sox Nation, you have a problem.  You have a King Felix fetish.  It’s alright.  I’m not judging.  (Ok. Yes, I am judging.)  Every fanbase has one player they fantasize about late at night, and he is yours.  Unfortunately, fantasies rarely translate well to reality.  As it currently stands, a Felix Hernandez for a Jon Lester/Jacoby Ellsbury package is neither likely, nor smart.

First of all,Lester and Hernandez have provided remarkably similar value according to fWAR.  Between the 2008 and 2011 seasons, Hernandez ranks eighth in baseball with 22.3 fWAR, and Lester ranks ninth with 20.9 fWAR.  Their FIPs during that time?  Hernandez 3.43 and Lester 3.47.  According to the statistics, the grass isn’t greener on the other side of the street.  In fact, it’s pretty close to identical.  Even if we look at this season alone, King Felix only leads Lester by a 2.9 to 2.3 margin.  That’s hardly a definitive margin.  If we look at ERA, Hernandez (2.89) leads Lester (3.33) by a fairly sizeable margin, but that number is somewhat misleading.  Hernandez plays in an extreme pitchers park, whereas Lester pitches in a double paradise.  Defense, luck, and division competition also play major factors in the ERA descrepancy.

Secondly, if we assume the Red Sox pick up the 2014 option on Lester (which is pretty likely), both pitchers are due to become free agents after the 2014 season.  In terms of contract duration, both pitchers are pretty equal.  That’s where the contractual similarities end.  Lester is owed roughly 28.5M through 2014, whereas Hernandez is owed roughly $48.75M.  Essentially, in making the trade the Red Sox would be agreeing to take on an additional $20M in salary for an extra 0.5-1.0 fWAR per season in value (projected).  From a logical standpoint, exchanging the two pitchers makes little sense.

Thirdly, Ellsbury will become a free agent after the 2013 season.  In many cases, this would be a prime time to trade him to a contender.  Only problem is the Mariners are nowhere near contention.  Oh, yeah…and Scott Boras is his agent, which makes it very unlikely he’ll sign an extension prior to hitting free agency.  For Seattle to trade their biggest trade piece for a player who will almost certainly leave the club 15 months later seems like a horrible misstep.  If they’re going to trade King Felix, it needs to be for players who can help them in the long-term.

Fourthly, Ellsbury is hurt, and hasn’t played since April.  When he comes back, who knows to what level he’ll play.  After sustaining a serious shoulder injury, it’s very possible his offensive production could be compromised for the remainder of the season.  Furthermore, this trade suggestion horribly undervalues Ellsbury as a player.  Even if we assume he’s not the 9-win player he was last season (and he’s not, by the way), but instead assume his true talent level to be between 5-6 wins; the Red Sox would still be grossly overpaying the Mariners by nearly a 2:1 margin, value-wise.  The more I analyze this trade recommendation, the worse it looks.

Lastly, calling Kalish the centerfielder of the future is pretty optimistic.  Right field?  Maybe, but even then he needs to prove he can both stay healthy and produce consistently at the major league level.  Two things, by the way, which he’s yet to prove.

Why is Brent Lillibridge starting and even batting leadoff? His major league stats seem horrific. I would much rather see Kalish or Ross in center field until Ellsbury gets back.

Why is he batting leadoff?  Because Bobby V loves trolling Red Sox Nation.  Seriously.  That’s all I’ve got.  There’s no excuse for why he’s batting leadoff.  He just is, and it figuratively kills me inside when I see him at the top.

Why is he starting?  Interesting question…  This season, he’s looked pretty abysmal at the plate.  Last season he produced a .362 wOBA, which was good for 24% above the league average.   Granted it was only in 216 plate appearances, but it shows some promise.

Why don’t umpires enforce the rules in the rule book? Why don’t the players button their shirts all the way? Aren’t they are out of uniform?

Does it really matter if players button their uniforms all of the way up?  I understand that standards exist for a reason, but I don’t believe it should be to the point of being nitpicky.  There are a lot of other things in baseball that need to be fixed that are far more important than uniform code.

The Phillies should be monitored for a possible trade for Cole Hamels. Kalish and Doubront would be better than draft picks if Hamels does not re-sign.

Ruben Amaro is not exactly known as a savvy General Manager, but even he would probably laugh at this trade offer.  Cole Hamels is a #1 or #2 starter depending on your evaluation.  He’s 28 years old, has an unbelievable change-up, and a playoff pedigree.  Doubront is a back of the rotation starter, and Kalish is an unproven potential starting outfielder.  If the Red Sox want Hamels, the starting price starts and ends with Matt Barnes.  It also probably includes one or two throw-in prospects, and one of the following players:  Ryan Lavarnway, Jackie Bradley, Xander Boegarts, or Blake Swihart.

Would you agree that the only difference between this year’s team and those of the last few years is the fans? People complain about the Red Sox way too much, but they play as hard as any other team and have the most exciting offense in baseball. Yet the crowd seems way less enthusiastic on a day to day basis.

Yes.  It’s the fans.  Quite frankly, the fanbase has become bitter, jaded, and entitled.  On one hand, it’s easy to understand how this has happened.  After last September’s collapse, I understand why people soured on the Red Sox.  All of that said, the fans have allowed themselves to be played by the media.  They’ve bought into this idea that the Red Sox are a mess, and that wholesale changes are needed with the roster, front office, and ownership.  It’s pretty sad.

Furthermore, look no further than this year’s All-Star voting campaign to see fan apathy.  Only David Ortiz was selected to the All-Star team by fan vote.  I realize that the Red Sox have been an veritable MASH unit all season, but that’s never stopped Red Sox Nation in the past.  In a way, the situation is pretty hypocritical.  So many fans are whining about team apathy (an untrue assumption), but the fans are far more apathetic.  It’s another great moment in self-awareness.

I think someone has to tell Salty to wear a helmet backward and throw his mask like everyone else. I have counted five times this year where Salty does not catch a throw to the plate. The Mariner loss last night was inexcusable. How does he not come up with that ball? He didn’t view it. He is obstructing his view with his mask on all the time.

While this may be a great suggestion (and it certainly seems to have some merit), I always find it humorous to read these kinds of questions.  The readers are teaching the players how to play their position.  That takes a lot of balls, folks.

I’ve noticed that we don’t see or hear from Ben Cherington nearly as much as we did Theo Epstein. Everything seems to be filtered through Bobby V. Is that Ben’s style, is he avoiding the hard stuff, or is he simply maturing into the role?

I get the impression that Cherington is more of a quiet leader, whereas Theo seemed to relish being a primary spokesperson.  You could see this especially in his early days in Boston, and now with Chicago where he’s overshadowed GM Jed Hoyer.  Also, when you have a gregarious attention whore like Bobby V (not judging…ok, yes I am), Cherington doesn’t have to be out front.

When will Will Middlebrooks get a new number and what will it be? And when our outfielders are healthy, who’s the next trade target and what Sox are on the table?

I hear Middlebrooks is awfully fond of the number 327, but uniform numbers don’t go up that high.  Really though, does it matter?  I don’t care if it’s 2 or 72.  As long as he has a number and is playing well, that’s all that matters to me.

As for potential trade targets, I see Ryan Sweeney (once healthy) as someone the Red Sox may trade.  This is not an indictment of his abilities because he’s played so well this season.  Instead, it’s a matter of redundancy.  In Sweeney and Kalish, the Red Sox have two outfielders that are left-handed, mash righties, and play excellent defense.  Both deserve major league playing time, but there’s not enough time for both to play regularly.  As a result, one needs to go.

The Youkilis trade was the poorest I’ve ever seen. They got nothing in return and it still cost them $5.5 million. Was that the best they could do? What an insult to a man who has given us so many good years. Some GM we have!

Isn’t it possible that this was the best trade Cherington could have gotten for Kevin Youkilis?  GMs aren’t trading players for their past performance, but instead their present and future performance–or at least, they should be.  Youk is 33 years old, and he’s on the downward slope of his career.  (Wow.  It feels weird saying that.  I’m nine days older than Youk.)  I don’t believe he’ll continue to play as poorly as he did with the Red Sox, but I don’t see him being too much better than a league average hitter.  Furthermore, his impending free agency only lowers his trade value.

If Cherington really wanted to insult Youkilis, he would have traded him for a bag of bats and balls (literally).