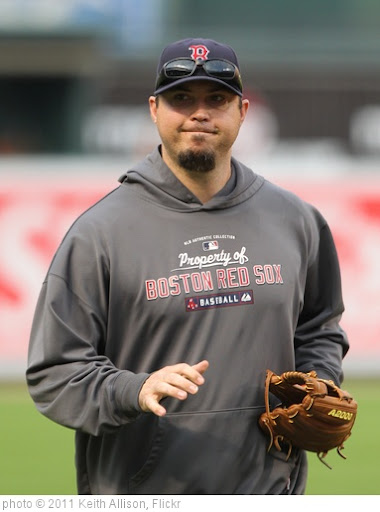 Don’t be fooled by the rocks that they’ve got, it looks like the Red Sox have put Beckett on the block…or at least they’re exploring the opportunity according to ESPN Boston’s, Gordon Edes.

“Two days before Tuesday’s trading deadline, all appeared quiet on the Red Sox front, although one major league executive insisted Sunday night that the team is looking for a buyer for starting pitcher Josh Beckett.

‘They’re trying to dump him,’ the executive said, ‘but I don’t think anyone would touch him without a big discount.'”

Beckett’s surly attitude, age, recent performance, and of course, his contract complicate matters greatly.  On top of that, you have to factor in his 10/5 rights*, which gives him a de facto no trade clause.  While trading him is certainly not impossible, it’s certainly an uphill battle to climb.

* 10/5 rights – When a player achieves ten years of major league service and five years with the same team, teams must receive a player’s permission before executing a trade.

According to Yahoo! Sports Jeff Passan, the Red Sox are targeting contending teams to which they believe Beckett would waive his 10/5 rights.  The Dodgers, Rangers, and Braves are believed to be among the teams potentially interested.

The Braves, who nearly completed a trade for Ryan Dempster before he declined the trade, have been linked in nearly every trade rumor for the past month.  Given their relatively cheap corporate ownership who seem unwilling to take payroll beyond the $90-100M mark, Beckett seems like a poor fit for the Braves.  He’s the type of high salary, long-term investment pitcher that the organization has stayed away from in recent years.  Unless the Red Sox are willing to eat around 75% of his remaining salary, I don’t see a trade happening.

Not all that long ago, the Rangers had an incredibly deep, formidable rotation.  Now, it’s in need of reinforcement.  Their number two starter, Colby Lewis, will miss the rest of the season with a torn flexor tendon in his elbow, and Neftali Felix was removed from his latest rehab start with tightness in his elbow.  (You know what that probably means).  As a stop gap measure, Alexi Ogando will be switching from the bullpen to the rotation.

Further complicating matters is the Angels making a big splash by adding Zack Greinke to their already strong rotation.  Nolan Ryan, the fierce competitor and team President, won’t idly stand by.  Beckett is the kind of fireballing Texan that Ryan loves.  The question is whether or not he’ll be willing to take on part of his contract.  Red Sox should not be expecting Mike Olt or Jurickson Profar in return.  Both of those guys are off limits; especially in exchange for a borderline salary dump like Beckett.

The Dodgers new ownership tried to make a big splash in June by acquiring Carlos Lee from the Astros. He spurned them, and accepted a trade to the Marlins.  Oops.  The Dodgers have made up for it by trading for a much bigger fish in Hanley Ramirez instead, and have been involved heavily in trade rumors for Ryan Dempster, Hunter Pence, etc.  They seem desperate to make some big bold moves regardless of the cost or logic.  Luckily, they have the right man for the job in Ned Colletti–someone who boggles the mind on a daily basis.  In the grand scheme of things, I’m not sure they’ll be willing to take on Beckett’s deal.  Still, the new ownership might be willing to take that chance in hopes of capitalizing on the excitement by taking out their chief rival in the playoff hunt.

This leads me to a question I’ve been mulling for a few days.  Clearly, most members of Red Sox Nation want Josh Beckett shipped out of town.  If the Red Sox are forced to dump his contract (and eat 75% or more), and they get little in return as a result (meaning no A or B graded prospects), would you still be happy with the move?  Realistically, what do you expect from a Beckett trade?  Leave your comments in the section below, and let us know.