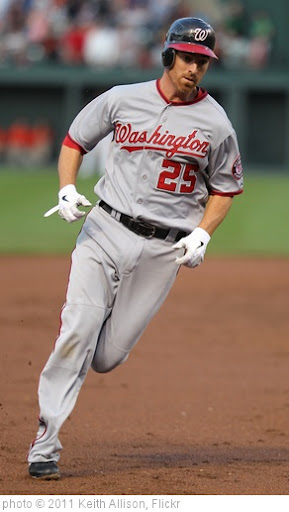 Over the last couple of weeks, I’ve taken a long look at the Red Sox’s current roster.  I’ve reviewed player performance, examined contract situations, and made assessments of each player’s future in Bostonin 2013.  (See Part 1 on Position Players and Part 2 on Pitchers and Part 3 on free agent catchers)  Here’s the roster I came up with:

1B – Jarrod Saltalamacchia (?) or Free Agent

After trading Adrian Gonzalez to the Dodgers in the monster contract purge in August, the Red Sox have a very serious need at first base.  There will be a number of potential free agent options available to Ben Cherington and company.  None of the options are particularly inspired, but they’re options nonetheless. Let’s take a look at a few.

James Loney (.249/.283/.336 in 465 Plate Appearances) – Loney is a borderline starter at best, even on a middling team like the Royals or Astros.  That’s a big reason Tom Werner’s comments about Loney this past September were so baffling.  Despite some of his obvious limitations, he does have some have a few valuable skills.  For instance, he has doubles power, which theoretically should play well in a doubles paradise like Fenway Park.  Plus, he’s an excellent (and underrated) first baseman, defensively.  All of that said, he pretty average in the on-base department; lacks the typical home run power at a power position; and doesn’t add value on the base paths.  Even if he agreed to return at a rate that’s significantly lower than the $6.375M he earned in 2012, he’s still not worth re-signing.  He’s a replacement level player at this point.

Kevin Youkilis (.235/.336/.409 in 509 PAs) – Entering 2012, I thought it was a nearly a foregone conclusion that the Red Sox would pick up Youk’s option.  Clearly, that didn’t happen as he was traded to the White Sox for Zach Stewart and pocket change.  After the season, the White Sox declined his $12M option; thus making him a free agent for the first time in his career.  Despite Youk’s declining skill set and lengthy injury history, several teams will likely take a long look at the fiery goatee cloaked corner infielder.  He has excellent on-base skills; solid home run power; and above average defensive abilities at first base.  Still, due to the incredibly shallow third base market; he’ll likely field a number of offers that are greater than what the Red Sox will be willing to offer to have him play first base.

Adam LaRoche (.271/.343/.510 in 647 PAs) – What a difference a season can make!  Just one injury riddled season prior, he’d produced a woeful .546 OPS.  In 2012, LaRoche finally escaped the label of “the prototypical league average first baseman” label, and proved he could be a major presence in a champion contender’s lineup.  Unfortunately, his breakthrough came during his age-32 season, a time when most players are beginning to decline.  Still, as the premier first baseman on this year’s relatively thin market (especially in comparison to last year’s free agent bonanza at first base), he’s likely to get a few looks from teams willing to give him a bigger contract than they should.  Still, he’s an interesting option, and someone the Red Sox should take a look at signing.  If they can get him to sign a two year $25M deal, he might be worth it.  At the very least, he’s a consistent, semi-long term solution.

Carlos Pena (.197/.330/.354 in 600 PAs) – It was just six years ago we were all lamenting Pena slipping through our fingers.  We allowed him to leave as a free agent after the 2006 season, only to watch him break out in Tampa Bay to the tune of 46 home runs.  While he never repeated that season, he displayed prodigious power and solid on base abilities in 2008 and 2009.  Since 2010, things have been different.  His skills have eroded; he can no longer hit for average; and his slugging hit an all-time low despite hitting 19 home runs last season.  He’s unlikely to have a rebirth in his age-35 season, but he could be an interesting option for the Red Sox.  This is especially true if the Red Sox whiff on other options and/or he’s available for pennies on the dollar.  He’s certainly not ideal.

Lance Berkman (.259/.381/.444 in 97 PAs) – Fresh off of a tremendous comeback campaign in 2011, Berkman spent much of the 2012 season on the disabled list with knee injuries.  Coming back from such an injury might be tough in his age-37 season, but Berkman has proven he still has the skills to be a quality major league hitter.  The big question is whether or not he can stay healthy enough to show off those skills.  He’s definitely a high risk/high reward type of free agent.  Luckily, his price will be greatly reduced because he’s not a sure thing.  Signing him would require an adequate backup plan.

Mike Napoli (.227/.343/.469 in 417 PAs) – After a monster 2011 season, many were hoping for a monster follow-up in 2012.  That didn’t exactly happen.  That isn’t to say he wasn’t still productive at the plate, but he didn’t come anywhere near matching the 173 OPS+ he produced in 2011.  In addition to big power and above average on-base abilities, Napoli brings a lot of versatility.  He can play catcher, first base, and DH.  He might be a good option, especially if the Red Sox sign someone like Berkman.  His presence on the roster would allow Cherington to trade some catching surplus, while providing a nice back-up plan should he sign a high risk/high reward guy like Berkman.

Carlos Lee (.264/.332/.365 in 615 PAs) – Mercifully, the disaster that was his six year $100M contract is finally over.  Bad news is Lee is a free agent who will likely be tempt some of the sad, desperate GMs throughout the league.  Don’t fear Dodgers and Phillies fans.  Ned Colletti and Ruben Amaro already have expensive first basemen signed long-term.  You’re safe–probably.  Still, he’ll sign with someone, and I’m not sure why.  He can’t play defense; average in the on-base department; and produced a .365 slugging percentage.  What is there to like?  Cherington needs to stay very far away from him.

Lyle Overbay (.259/.331/.397 in 131 PAs) – Remember when I was talking about LaRoche being the “prototypical league average first baseman?”  Well, Overbay was his twin until two seasons ago.  Now, Overbay is probably best used in a platoon role.  As a lefty, he could be an interesting option in a platoon situation, provided he sees the vast majority of his plate appearances against right-handed pitching.  He should NOT be used as the primary starter.

So there you have it.  The first base free agency situation isn’t exactly sexy.  There are a few interesting options out there, but there’s no one you’d like the Red Sox to commit themselves to long-term.  What do you think the Red Sox should do at first base?  Share your thoughts in the comment section below.