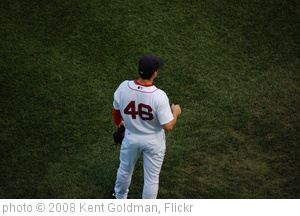 If there’s one thing you should know about me, it’s that I’ve never been a fan of narratives in sports. I know a good story is fun to follow, but too often, the media takes a story and beats it to death with terrifying efficiency. Just ask your friendly neighborhood Jets fan.

I don’t have to tell you that these storylines have dominated the past two years in the Boston media. The September collapse in 2011, the “Fried Chicken and Beer” incident, Bobby Valentine’s various shenanigans, Kelly Shoppach’s text message, and on and on and on. It was exhausting.

As many changes as have been made to the roster this year, however, the Boston media remains the same bright-eyed optimists they always have been – or something like that. So it’s almost inevitable that something’s going to rub them the wrong way, and we’re going to hear about it for weeks.

With that in mind, let’s take a look at the dominant storylines of the 2013 season that are already annoying me, despite the fact that they haven’t even happened yet.

If there was a positive to 2012, it was probably the year of respite from John Lackey. There’s been a lot of talk about Lackey during his eventful three seasons in Boston, but he ended up becoming nearly invisible this past season, which managed to be terrible entirely without his help.

The problem is that “helpful, but not amazing” isn’t a description that gets page views. Nobody’s coming to read an article titled “John Lackey has Been Alright for the Red Sox, I Guess” anytime soon so the story is inevitably going to become either “Lackey isn’t living up to his contract,” or “Look at how remarkable Lackey’s comeback has been!”

Lackey is very likely either going to be the savior or the pariah of the 2013 season. Maybe it’s just me, but I’m not sure I want to hear about that for 162 games this year.

I’m of the opinion that Mike Napoli will eventually, mercifully be signed. He’s just too much of a fit, and the backup plan – Adam LaRoche – comes with the additional cost of a 2nd-round draft pick. As we’ve seen this offseason, teams just aren’t willing to part with picks for 30+ year old players this season. Just ask Michael Bourn or Kyle Lohse. I don’t think the front office wants to lose that pick over injury wording in Napoli’s contract, so I’d expect to see this ironed out eventually.

Assuming the deal does get done, then, there’s going to be quite a bit more pressure on Napoli to perform than there was before. Any prolonged slump, and Napoli will ignite speculation that his hip isn’t 100% and he’s playing hurt. A DL trip would become “Why did the Sox sign Napoli when they knew he’d get hurt?” Napoli’s going to have to play a mostly complete season to avoid this saga coming back to haunt him.

It’s tough enough returning from an injury to begin with, but Napoli’s also coming off a down season in his final year with the Rangers, so there’s inherent pressure on him to return to his past self. Now he’s also been the source of drama for the organization before he’s even officially become part of the team. There’s already an expectation among fans and the media that the Red Sox show visible improvement from last season, so if that improvement doesn’t happen for whatever reason (although I expect it will), Napoli will be an easy scapegoat for those looking to point fingers.

With pressure like that, it’s a miracle anybody wanted to play for the Red Sox this season.

This particular story gets my vote for “Most Likely to be the Subject of a Scathing Dan Shaughnessy Column in July,” by the way.

Last year’s salary dump with the Dodgers remains, to me, the most important thing that happened to the Red Sox all season long. The cap freedom and flexibility it provided us are going to be absolutely crucial to the team’s future. I like to think most people understand how that benefits us. It wasn’t a trade meant to help the team today.

There are going to be those who care more about the present-day implications of the deal, however, and to those people, any success Gonzalez, Beckett and Crawford have in Los Angeles is going to be weighed against the success the Red Sox have this year. Whether or not that actually makes sense is irrelevant. I can almost guarantee we’ll see more than a few “We never should have made that trade” columns if the Dodgers mesh into legitimate contenders (which I get the feeling may not happen). I liked Gonzalez a lot, but moving him gave Cherington the flexibility he needed. Still, if Gonzalez does bounce back to his San Diego self in 2013, it’s going to be tough watching him do it in Los Angeles.

The other side of this is going to be the prospects the Red Sox got in return – particularly Rubby De La Rosa and Allen Webster. De La Rosa is on the starting rotation bubble and Webster probably won’t see the majors this year, but their future with the team is likely going to be a key factor in whether the Dodgers dump-off is seen as a “successful” trade or not. Realistic or not, these guys will be expected to contribute sooner rather than later, especially considering the sorry state of the Boston pitching rotation last year.

What, did you think Bobby Valentine wasn’t making an appearance in this column? I hate to say it, but any piece about overblown storylines would be incomplete without Bobby V, whether he’s present with the team this season or not.

That being said – and I do think Valentine’s face is going to be on your TV any time the Sox go into some kind of slump – the situation I find more interesting is the “Terry Francona is managing a baseball team again” one. You know, Terry Francona? The guy who led us to two championships? Yeah, that guy. He’s still alive and such.

While on paper, the Indians’ 2013 outlook is pretty awful in my eyes – and I’m somehow not buying that Mark Reynolds and Nick Swisher will do much to change that – a lot of the perception of John Farrell’s first year in Boston is going to come in comparison to Francona’s in Cleveland. Farrell has a much stronger roster and more prospects to work with, obviously, so it’s conceivable that we never have to talk about this.

But consider the following scenario: Ubaldo Jimenez returns to his 2010/2011 form (it’s a far-fetched hypothetical, but bear with me), Carlos Santana and Jason Kipnis put together breakthrough career seasons, Justin Masterson emerges from his year-long hibernation, Trevor Bauer becomes a legitimate MLB starter, and Asdrubal Cabrera sticks around for one more rodeo, and all of the sudden, the surprising young Indians are sitting at 2nd place in an AL Central loaded with question marks beyond the Tigers.

Say in in this fantasy world that the Red Sox are underachieving; not even bad – just, say, floating around .500 – can you tell me with a straight face that “Firing Francona Was a Mistake” isn’t going to become a thing people talk about? Exactly.

First things first – as far as I’m concerned, 2013 will be “The Year of Ellsbury” until further notice.

Maybe it’s not the boldest of calls putting the Ellsbury saga at #1 on this list, considering this particular narrative has been going on for what feels like an eternity. But Ellsbury’s becoming a free agent at the end of this year and that means it’s sure not going away any time soon, so as far as I’m concerned, it’s more than earned the top spot just on its current merit. It deserves it.

My fellow Fire Brand columnist Dan Podheiser wrote an excellent breakdown of Ellspocalypse 2013 on Friday so I won’t go into too many specifics here, but the simple fact here is that Ellsbury’s impending free agency is going to turn this story into a snowball rolling downhill – the coverage is going to keep growing and growing and growing until it hits something (or Ellsbury hits another player. Too soon?) and the situation is resolved, whether through extension, free agency, or a trade.

In other words, it’s going to be a while.

Buckle up, folks – The Year of Ellsbury has begun.