I can pinpoint exactly when it all began. It started with Joe Reilly’s January 5th column right here on Fire Brand. Soon enough, I started to show symptoms of a developing case of Lackey Optimism.

The more I thought about the possibilities, the more I started to see the potential silver linings. I mean, what if the guy really hasn’t been healthy in 3 years? What it he was trying to pitch through the pain to live up to his contract and earn our approval and it all just went into a downward spiral? What if his personal life really had become a distraction? What if the entire New England region hating him was actually wearing him down?

It led to me tweeting, “It must be winter because I’m developing a case of Lackey Optimism.”

Shortly after I posted that the following conversation ensued:

My Wife: Did you really just say that you have a case of Lackey Optimism?

My Wife: Seriously? That’s like the girl who sees her jerky ex-boyfriend at a party and says ‘Maybe he’s changed.’ 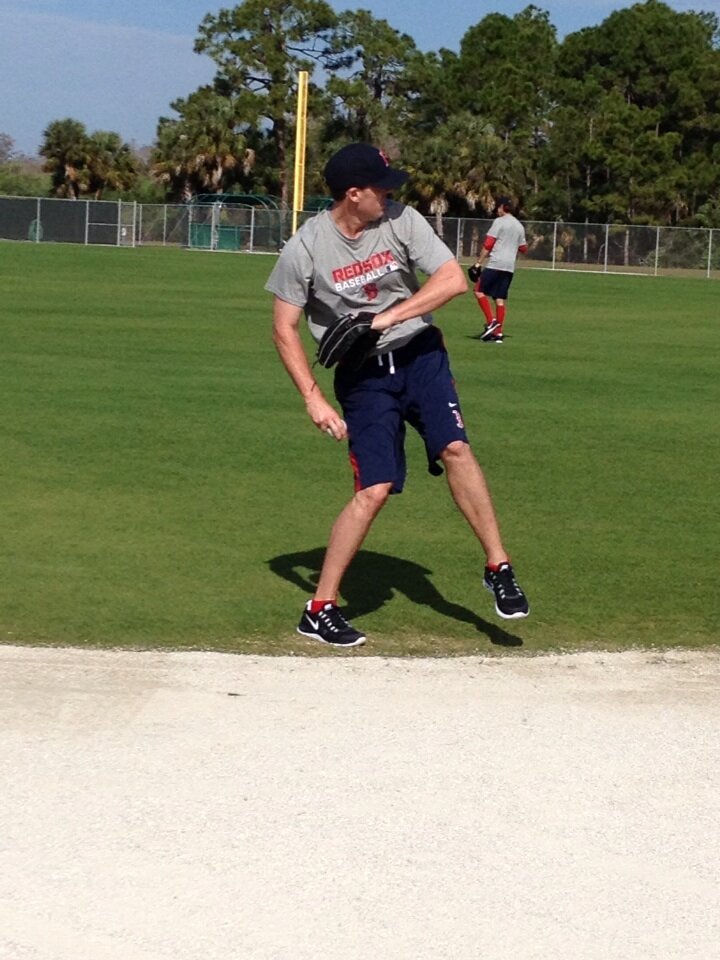 Wait…you’re telling me that this picture isn’t from Lackey’s senior year in High School? (@PeteAbe/Twitter)

Me: Listen, he’s supposedly in great shape, and the healthiest he’s been in years! Maybe he’s really changed. Maybe he deserves another shot. Maybe…

My Wife: He hasn’t changed, it’s the same guy and he’s going to break your heart again.

Soon enough though, I was ignoring my wife’s advice and giving him another chance. I started texting pictures of a suddenly skinny John Lackey in Ft. Myers to my friends and asking questions like “Doesn’t it look like this is Lackey’s younger brother?”

My newfound optimism continued to steamroll forward gaining speed and momentum. I would try to temper my expectations by prefacing things with the blanket statement “He won’t ever live up to the contract, but…” and then I would insert bigger and bolder predictions as time went on:

Confession: I have always hated John Lackey.   Ok, hate is a strong word but I have never, ever liked the guy, not even a little bit. I’m not even rational about my open disdain for him. I blame him for everything. Remember how I said before that I like to blame everything that goes badly on Larry Lucchino? Well anything that isn’t Lucchino’s fault definitely falls on Lackey’s shoulders. I was so happy that I could pin the crumbling success levels of my beloved pseudo-aces Josh Beckett and Jon Lester on Lackey forcing them both to consume large quantities of fried chicken and beer in the clubhouse against their will.

That’s not just revisionist history, either. I was against the signing from the minute it happened. (No, I’m not someone who always claims to have always been on the right side of those decisions after the fact. I was in favor of a lot of moves that turned out to be awful in the long run, such as Edgar Renteria, Daisuke Matsuzaka, and Carl Crawford.) I was never a big fan of Lackey’s work in Anaheim, and he was coming off of consecutive years with less than 180 innings pitched. Still, Theo opened up John Henry’s wallet to drop $82.5M on a guy that I thought would be, at best, our 3rd starter.

But now? I feel like Lackey and I might be finally turning a corner. Sure it would be easy for me to question why he never felt it was necessary to get in shape like this for the first 3 years of his contract, but shoot, it’s a new era at Fenway! We just suffered through a team that didn’t win 70 games in a season, so if you can help us avoid that again this year, we’re willing to let bygones be bygones, John.

After all, it’s Spring Training, right? It’s like baseball’s New Year. The time to close the door on the past and look forward into the future. The grass looks greener, the jerseys look brighter, the players look like they’re in better shape, and everyone is saying all of the right things. The grass is actually greener on the other side of the country in the spring. (RedSoxNetwork.com/Flickr)

Spring is the only time of year that brings out the optimistic side of a fan as pessimistic as I am. My relationship with the Red Sox has long been a balancing act of constantly rooting for the best but at the same time always expecting the worst. I’m one of the fans that assumed that Dave Roberts was going to get caught stealing second, but was absolutely ecstatic to see him somehow beat the tag. You would think that two World Series Championships in 4 years would have somehow changed that, but maybe it’s more about who I am than who they are.

I’m surrounded by Yankee fans who assume that they are going to win the World Series every year until the last out of their season is finally recorded. Part of me disdains that arrogance, but another part of me admires it. Why don’t I give my team the benefit of the doubt like that? Why don’t I assume the best until something else happens? Is it just a defense mechanism that was developed and reinforced from 1986-2003? Am I like a dog who was hit so many times that he still flinches when a hand comes up to pet him? Is it bad to ask five rhetorical questions in a row?

Meanwhile in Florida, Daniel Bard allegedly looks like the old Daniel Bard again. Has he faced any batters? Well, no. But that didn’t stop me from exuding real joy at some of the reports of his rejuvenation. Who cares if two-fifths of our starting rotation was injured before the completion of the first full day that pitchers and catchers reported, right? Or that David Ortiz’s achilles is apparently not completely healed yet. The new season is here and John Lackey is going to be a solid piece of the rotation every five days, and that is what I’m going to continue telling myself!