Photo by Kelly O’Connor of sittingstill.smugmug.net

One can make the point that baseball is like natural evolution – to succeed/survive, you have to adapt, either constantly or gradually. Rookie pitchers, at least when they first enter the league, are already ahead of the curve. The hitters & advanced scouts can’t really prepare you for what you’re going to see, so the rookie gets a year, maybe two or three, of dominance. Sooner or later, however, the batters will catch up to you, or regression will strike. That can happen as soon as the second year in the majors, or a few seasons down the line. How you adapt to this sudden loss of dominance will determine if you stay in the league.

For the Red Sox, they’ve come to that point with Jon Lester. From 2008 to 2011, fans loved making lofty predictions about him. He struck out a good 9-or-so batters per game, and wasn’t one to give up homers left and right. An ace for sure, and a possible Cy Young contender. Hell, he even no-hit the Kansas City Royals in 2008.

However, something has changed ever since the latter part of 2011, and for once, I’m not talking about the entire team. Lester’s been quite hittable, and the batters have been making much more contact than ever before. We’ve seen it this year, especially in 0-2 counts – Lester cannot put away batters.

Now, that makes one wonder. What is Lester throwing in those two-strike counts? What would Lester use as a put-away pitch? What pitch has fueled his success ever since he came into the majors? The answer to all: his cut fastball. Lester’s cutter has been his go-to pitch for when he needs to put away a batter, be it right- or left-handed. For the last 1 1/2 seasons, however, it’s been a completely hittable pitch to both types of batters. Here’s why: 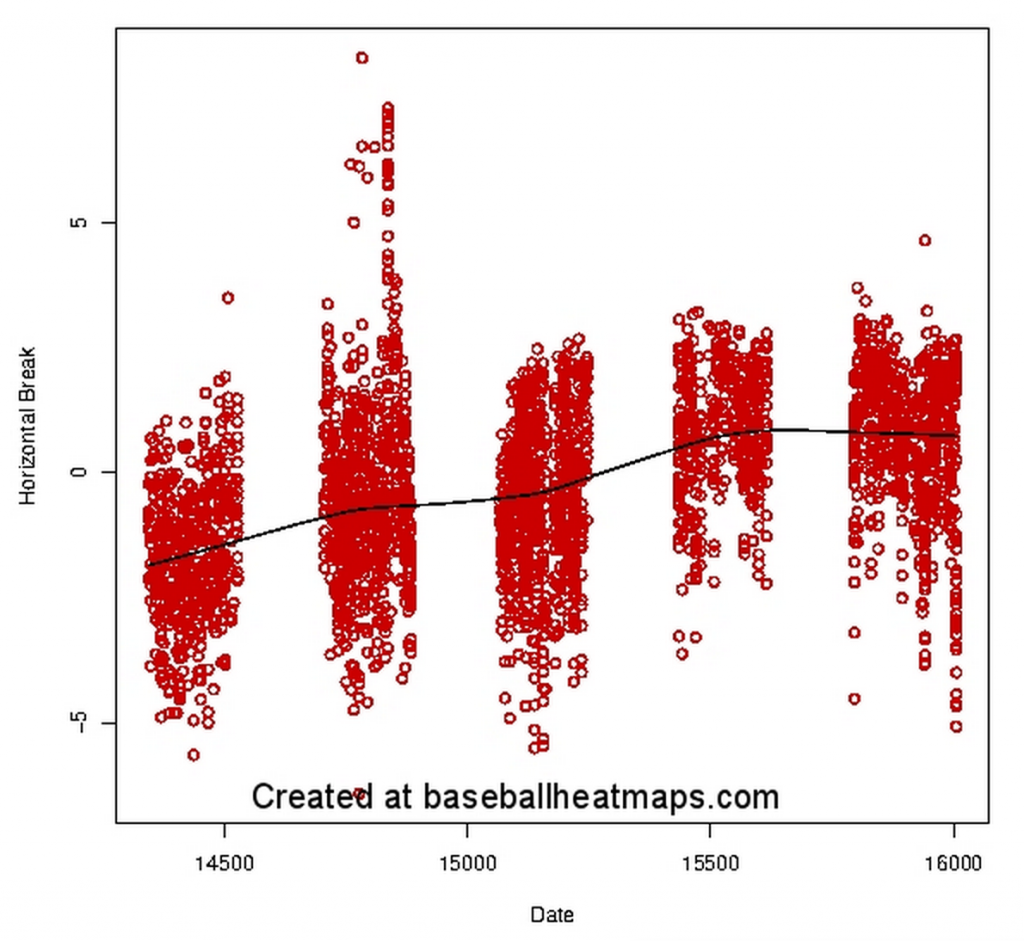 Those clumps of red circles represents cutters thrown in the years Lester’s had a full season in he bigs, from left to right: 2008-2013.  The black line represents the average side-to-side movement of his cutter over the course of those six seasons, with -5 indicating the left-field side of the plate. You can see where the trouble begins here – at the beginning of the 2011 season. Lester’s cutter started to flatten out and fly dreadfully straight. It looked like it could rebound after 2010, but instead the movement kept drifting back towards the center of the plate, inch by hittable inch. Not only that, but at some time in his awful 2012 campaign, the cutter started tailing back towards the right-field-side of the plate.

Now, imagine you’re aiming for the outside corner with Lester’s cutter against a left-handed hitter. It’s a sound tactic – the cutter is supposed to break to the outside corner of the plate & a little bit down from lefties, leaving them unable to touch the ball if they commit to swing. Right-handers can’t usually handle a pitch breaking inside like that at 90 mph, so even if you throw it to them, they’ll foul it off & break their bat, or miss entirely. Remember though, this is Lester’s current cutter, so it’s 2013, and the pitch is now tailing back to that lefty hitter, breaking more across the plate than painting the outside corner. Once you’ve thrown it, and you see that ball break and start inching toward the center of the plate, you just pray to whatever deity you worship that the batter doesn’t hit it.

As we’ve just gone over, the cutter is supposed to 1. break away from lefties and 2. induce a swing. Well, in this 0-2(!) count, Lester only got one of those to happen:

Yes, I understand that was hit by the mystical 41-year-old Raul Ibanez, but that’s just the tip of the iceberg. Out of the six home runs that have been nailed off of Lester’s cutter, four have been by left-handed hitters, and they are slugging a ridiculous .757 against the cutter. Compare that to his 2009 season, where lefties hit no home runs and slugged an anemic .320 off of the cutter. “Alarming” doesn’t really convey the intensity of emotion I want you to feel when you see this. More like “OH GOD OH GOD THIS IS AWFUL”.

The cutter is Lester’s second-most-used pitch, with his four-seam fastball taking the top spot by a good 300 pitches or so. But since his cutter moves like a fastball now, considering that it’s either flying straight or breaking the opposite way, why don’t we compare the movement of the two this season? (This is via Pitch F/X, so all these locations are from the catcher’s POV) 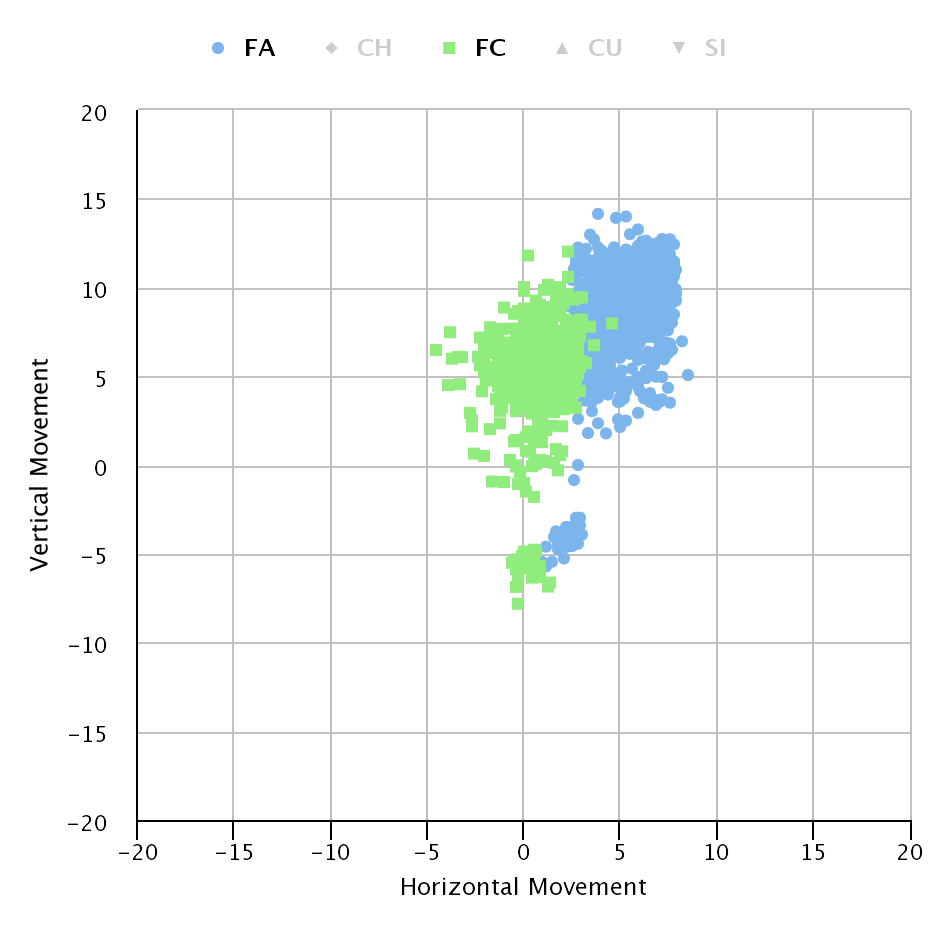 Blue is the fastball, green is the cutter. This graph would be inspiring to look at – if Lester was right-handed. When your four-seamer, a pitch designed for pure velocity and little movement, has more break than your cutter, there’s a problem. In short, the cutter is basically mimicking his fastball, and it’s moved roughly three inches on average from where it used to be in his glory days circa 2009. Those three inches are the difference between jamming a batter and hitting the sweet spot of the bat. Over the last two seasons, Lester’s cutter averaged a speed of 89.7 mph. Combine that with straight, somewhat tailing movement over the center of the plate and you’ve got something that all hitters refer to as “batting practice”. Lester has been playing with fire, and we’ve seen him get burned time and time again.

So now we look for solutions. Mechanical problems, perhaps? Well, the first thing I looked at was release points, and there wasn’t much out of the ordinary. Lester had changes of a centimeter or two in his releases, but nothing so drastic as to give away a problem on a scale such as this. Then is he throwing it too hard or not hard enough? If we look at it with Pitch F/X again, there’s not much of a correlation between the speed of the cutter and the break: 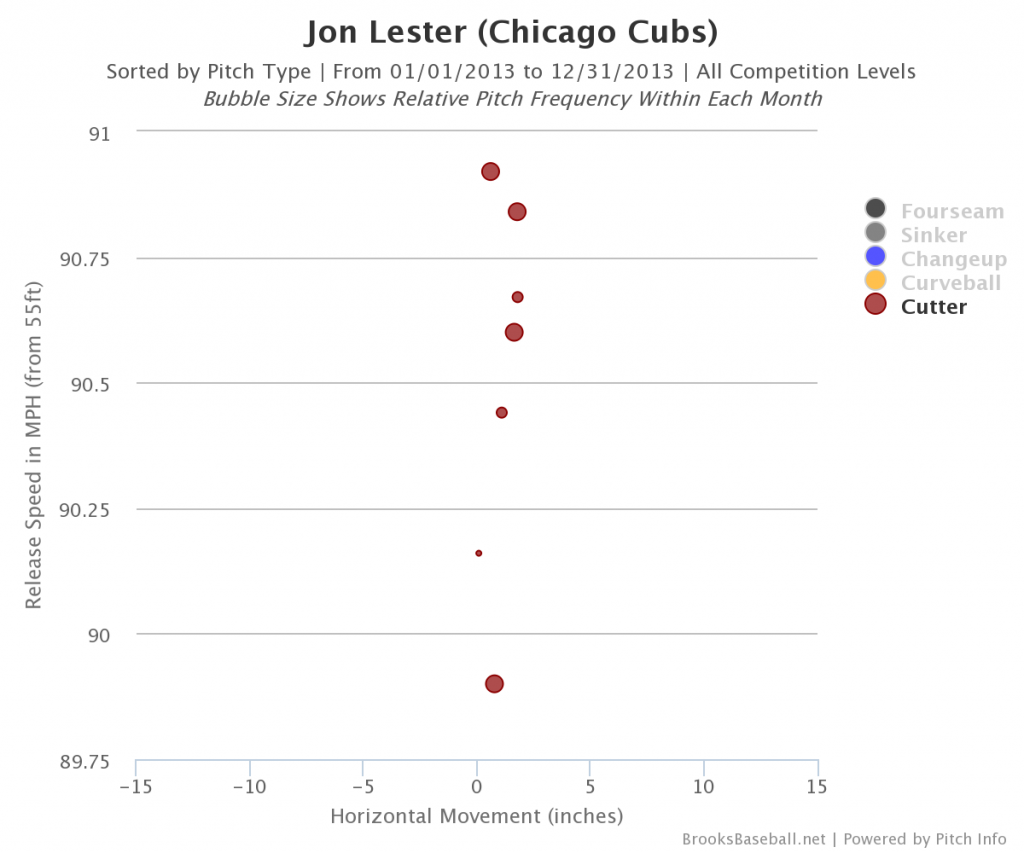 If anything, the harder he throws it, the more it comes back across the plate. It brings up the Law of Reverse Effect: “The harder you try, the more difficult everything becomes.” If it’s not a mechanical issue, then it’s just some bad regression of his cutter’s movement.

Jon Lester needs to decide where to go from here. For starters (no pun intended), he can throw his cutter less and the change-up more, which has been a dead ball to hitters, as they haven’t been able to get it in the air or hit it at all since Lester’s change-up has a swinging strike rate of over 20%. What scares me, as a Red Sox fan, is Lester’s recent stubbornness to tone down the amount of cutters he throws. His reasons are rooted in sentimentality, and it’s not a good sign if you’re banking on a rebound.

These are the crossroads that Lester has arrived at. Does he attempt to right the ship, shift away from the cutter a bit, and see if his numbers rebound? Or is he content with being a middling number-three or number-four starter for the rest of his career? If the Red Sox expect anything progressive from him, Lester needs embrace evolution and adapt to the current situation that he’s in so he can get batters out like he used to. If he doesn’t, well, he won’t be able to succeed against major league hitters – and eventually, Father Time himself.