Thursday Links: The Empire Strikes Back 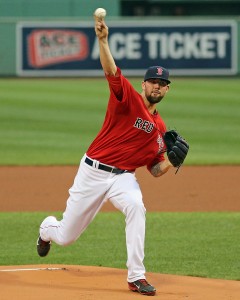 In his fourth career start, Anthony Ranaudo suffered his first major league loss on Wednesday night. Pitching against his favorite childhood team, the New Jersey native allowed six hits in 5.1 innings pitched, while walking 2 and striking out just one. New York opened the scoring in the 2nd inning, when Brian McCann tattooed a Ranaudo fastball over the right field fence for a two-run home run. Three innings later, the Yankees almost put the game out of reach, as they loaded the bases with just one out and the top of the order due up. However, Ranaudo was able to limit the damage to just one run, courtesy of a Jacoby Ellsbury sacrifice fly. An inning later, Brock Holt put Boston on the scoreboard with an RBI double that scored Red Sox newcomer Jamile Weeks for first base. With Ranaudo out of the game after the 6th, New York tacked on 2 more runs to their total against Red Sox reliever Alex Wilson. After retiring the first batter he faced, Wilson surrendered an triple to Jacoby Ellsbury, then allowed an RBI single to Brett Gardner. Later in the inning, Brian McCann dropped a two out, bases loaded single into right field, which scored Jeter from third base. However, Daniel Nava played the hop in right field, and fired a bullet to home plate to cut down Carlos Beltran for the third out. New York went on to win by a final of 5-1 and split the series at two games a piece. Boston will play the rubber match of the three game set on Thursday, before returning to Fenway Park for a brief two-series home stand.

If I played 81 games a year at Yankee Stadium, I'm convinced I could hit at least 10 HR by an accident.