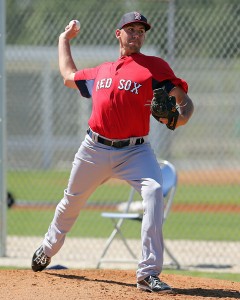 The Red Sox played their first of three games against the Baltimore Orioles at Fenway Park on Monday. Coming off his first win in a Red Sox uniform in his previous start, Joe Kelly toed the rubber for Boston in the series opener. After tossing a clean top of the first, Kelly allowed 3 straight singles to lead off the second inning, as Baltimore took an early one run lead. Later in the game, the Orioles took advantage of two defensive miscues by Boston, and added three more runs to their total. The Red Sox’ defensive woes began after Baltimore loaded the bases with one out in the sixth inning. Orioles’ middle infielder Ryan Flaherty chopped the ball to first baseman Mike Napoli, who threw to second to get the force out. However, as Xander Bogaaerts tried to complete the double play, he thew a short-hop back to first base that the covering Joe Kelly was unable to corral, and Baltimore pushed their lead to 3-0. An inning later, the Red Sox defensive blunders continued, as Boston handed Baltimore their fourth run of the night. With a runner on third and two outs, Yoenis Cespedes was unable to haul in a lazy fly ball in the left centerfield gap. The ball clanged off Cespedes’ glove, which allowed the runner from third to cross the plate with Baltimore’s fourth run. Meanwhile, Orioles starter Miguel Gonzalez kept the Red Sox offense at bay over 6.1 innings. While he did average a hit per inning, the right-hander was able to hold Boston to just one extra base hit, and only surrendered one hit when pitching with runners in scoring position. Following Gonzalez’ lead, Baltimore’s bullpen tossed 3 innings of one hit baseball. With their 4-0 victory on Monday, Baltimore now holds a 10 game advantage in the American League East standings.

That expression right there sums up the entire 2014 season. pic.twitter.com/adToxeV4KJ