Matt Barnes has a bright future for the Red Sox

A handful of rookie pitchers have made their debuts for the Red Sox in 2014, but despite flying under the radar, their latest call-up, Matt Barnes, might have the brightest future of them all.

2014 has been a trying year for the Red Sox, but fans have at least gotten the chance to see quite a few youngsters make their debuts. Xander Bogaerts has struggled overall, but still shown flashes of his widely praised potential. Christian Vasquez and his elite framing skills have been on display these last few weeks, and no one has created quite the buzz and fervor of support that Mookie Betts has since his return to the majors in mid-August.

On the pitching side, Boston has handed chances to Rubby de la Rosa, Allen Webster, and Anthony Ranaudo, with Brandon Workman also getting an extended opportunity to show what he can do. Just a couple days ago, the club added another young pitcher from its vaunted depth down in Pawtucket, calling up 2011 first-rounder Matt Barnes to pitch out of the bullpen for the rest of the season.

Barnes’ selection was praised at the time, with many noting the right-hander would likely move up Boston’s system quickly given his three years of experience pitching at UConn. He had big success during his first professional season in 2012, overmatching hitters at Low-A Greenville and High-A Salem. The righty’s performance earned him acclaim in the prospect world, with Baseball America ranking him 40th overall among minor leaguers heading into 2013 and Baseball Prospectus placing him at No. 38. 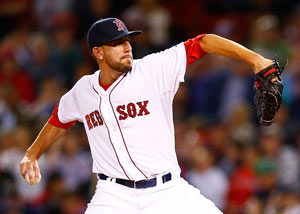 As a result of his apparent struggles, Barnes’ stock fell in comparison to other hurlers in the Red Sox system like Webster, Ranaudo, and Henry Owens. BA dropped Barnes out of their Top 100 rankings entirely this past spring, while BP ranked him at No.  64.

But what many observers missed in the midst of Barnes’ supposed struggles was the 24-year-old’s continued ability to generate swings and misses with his fastball, a skill Ranaudo and Webster don’t possess to nearly the same extent.  It can be easy to equate poor results with failed development down in the minors, and there is little doubt Barnes’ elevated ERA in Portland caused some to write him off too early. What had made Barnes such an intriguing prospect from the start, however—an explosive fastball and strong curveball—remained very much part of his arsenal.

Barnes went through similar struggles to begin his tenure in Triple-A this season. He carried a 5.06 ERA into the All-Star Break just as some of Boston’s other starters in Pawtucket were beginning to get the call to the majors. Yet in the season’s second half, Barnes made nine starts and allowed more than two runs just once. He pitched into the seventh inning on seven occasions and tallied 52 strikeouts and just 15 walks in 60 innings pitched. He had a 2.10 ERA over that span.

Even more encouraging has been his improved command and a curveball and changeup that are both showing progress. As Chaz Florino, SoxProspects.com’s Northeast Scout, wrote after seeing Barnes in a recent start, the righty’s curveball has “a chance to be a legitimate plus offering.” Furthermore, his changeup, long a question mark for Barnes, has shown progress throughout the summer, and he now uses the offering “enough to keep hitters guessing.”

That changeup was on display in Barnes’ major league debut Tuesday night. The UConn product showed confidence in the offering, throwing it to both right-handed and left-handed hitters. In all, Barnes threw 13 changeups and garnered five whiffs with the pitch, while also throwing a fastball that averaged 94.5 mph, according to Brooks Baseball (granted this performance came out of the bullpen, though Barnes did throw three innings.)

Barnes’ ability to have three average-to-better offerings with solid command makes him stand out among the Red Sox’s top pitching prospects. Ranaudo’s reliance on his fastball, for example, limits his ultimate ceiling. The same goes for De La Rosa, though he can at least combine his big fastball with a changeup that garners whiffs. Webster likely has the best stuff of anyone, but his persistent struggles with command make him a wild card.

The only pitcher that can match Barnes’ repertoire, at least among Boston’s Triple-A arms, is Owens, who looks likely to have three average-to-better pitches as well once he reaches the majors.

The Red Sox plan to use Barnes out of the bullpen for the rest of 2014, so fans won’t get a chance to see him make a big league start. Even so, his progress is undeniable, and his future is brighter than any of the arms to debut for Boston this year.

Barnes won’t be an ace, but he should be a dependable, mid-rotation starter who can eat up innings for the Red Sox assuming a trade doesn’t send him elsewhere this offseason. And that–a cost-controlled, reliable young starter–is a valuable commodity to have, especially for a team looking to add depth to its starting rotation.