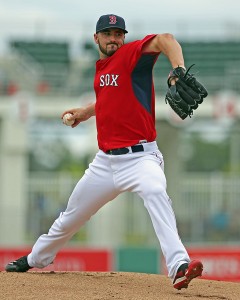 For the third straight day the Red Sox lost to the Orioles, as Baltimore completed their three game sweep of Boston. After breezing through his first two innings, Red Sox starter Brandon Workman endured a six run third inning, and was promptly knocked out of the game. The 24-year old allowed six runs on six hits in his nightmare third inning, and he even forced in a run with a bases loaded walk. With Workman out of the game, Baltimore continued to add to their lead, as Caleb Joseph drilled a two-run homer of Craig Breslow in the fifth inning. Later in the contest, Kelly Johnson and Ryan Flaherty each collected run scoring doubles, which pushed the Orioles lead to 10 runs. In the last of the ninth, the Red Sox staged a rally after Xander Bogaerts lead off with a double and was followed by back-to-back walks by Yoenis Cespedes and Allen Craig. With the bases loaded and one out, Daniel Nava ripped an RBI double off the monster which chased home two runs. A batter later, Red Sox newcommer Carlos Rivero drilled the first pitch he saw from Orioles lefty Joe Saunders into the Monster seats for his first career MLB home run. While the Red Sox managed to significantly chip away at Baltimore’s huge lead, their ninth inning rally ultimately fell short, as they lost Wednesday’s game by a final of 10-6. Boston will now embark on their final road trip of the 2014 season, which includes 10 games in 3 different cities.