You may not know his name, but Evan Lepler is famous. He provided the commentary for this YouTube video that has had over 200,000 views:

Since 2009 he’s been the play by play broadcaster for the Salem Red Sox. A graduate of Wake Forest University, he also broadcasts college basketball, as well as the AUDL ultimate frisbee league on ESPN3.

How did you get started doing this?

I’ve wanted to go into broadcasting my whole life, ever since I was a little kid. I pursued it in high school, I pursued it through college, and I got my first job in professional baseball in 2008 for the Delmarva Shorebirds, the Orioles affiliate in the South Atlantic League. After a year there, I was set to go back and the guy who was the broadcaster for Salem from 2007-08 got a job in Triple A, and he was a friend of mine, and he recommended me for the job in Salem. He left on Friday, I came up Monday, and they offered me the job on Tuesday. I didn’t know how long I was going to be here, and I still don’t know how long I’ll be here, but I enjoy calling the games every day. Every game is different and fun. When this is your office (Evan pointed out the window to the view of the field and the Blue Ridge mountains) it’s a pretty sweet gig. It’s fun, it’s especially fun for me being from Boston originally, I get to say “Welcome to Red Sox baseball” every night. I’m not Joe Castiglione or Dave O’Brien, but I try to sound like them, they’re the two guys I listen to more than anyone else. Joe Castiglione has an unbelievable style, and Dave O’Brien is everything a broadcaster should be in terms of voice, wit, information and description. I try to sound like those guys every night when I take the air, and there are other influences as well.

What do you think are your biggest strengths as a broadcaster? 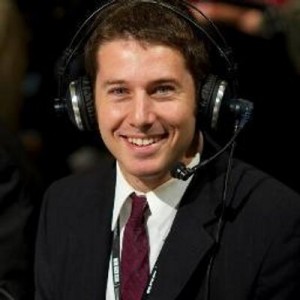 The voice of the Salem Red Sox, Evan Lepler

My passion is genuine, I’m a really passionate and enthusiastic guy, and I think that comes across. I try to be as honest as I can. I try to tell flattering stories about people, but I also want to tell the truth, and if I guy is struggling I want to tell the truth and let people know what I see. I’m really grateful to have that responsibility, because I know there are a lot of people my age or older who would love to be doing this. It’s not a lot of money or a lot of glory, but again this is my office. It’s a beautiful radio booth and an unbelievable view. In twenty minutes I get to say “Welcome to Red Sox baseball!” What else would I rather be doing?

The Red Sox minor league system has been loaded in recent years. What sort of impact does that have for you?

We’ve been really lucky, the last two years in particular it’s been amazing how many guys have come through here. From Jackie Bradley Jr. to Xander Bogaerts, to Christian Vazquez and Blake Swihart, Henry Owens, Matt Barnes, Garin Cecchini. Everybody. All with legitimate shots to make the major league team, and many of them could be All Stars. It’s been incredible.

Who have been the most impressive Red Sox prospects you’ve seen in your time as broadcaster?

It’s really hard to pick just one because guys go through hot streaks where they look like they’re the greatest player ever. Defensively, Jackie Bradley Jr. was unbelievable out in centerfield. The spark that Mookie Betts brought during the championship push of August and September last year, he was on a different level. To be doing that, especially as a 20 year old just being called up, that was just nuts. Offensively, defensively, baserunning, we just caught fire last year and he was a huge reason why.

How does it feel to see him playing for the Red Sox less than a year later?

A year ago at this time he was playing golf with me in Salem, Virginia on an off day, and now he’s up in the big leagues playing centerfield, a position he never played in the minors last year. One thing I often say is that it never gets old watching good guys that I got to know here in the Carolina League make an impact in the big leagues. Every time one of them does something good, whether it’s drawing ball four or getting a single or making a play in the field, there’s a sense of pride that I have that they came through here and I got to know them as people and as ballplayers before everyone else did. It’s always fun to see guys grow into their reputations that they had when no one had seen them before. I talk to the broadcasters in Pawtucket and Portland, and I get to see these players before they do. It’s a cool dynamic to be able to watch a guy every day for several months… you know their tendencies, you know their weaknesses, you just get a sense of them. That’s one of the great things about baseball, the day in day out nature, guys have their ebbs and flows.

Do you ever have scouts or journalists ask for your opinion on players?

People have asked me what I think about Manuel Margot, I say I’ve only seen him for six days. Give me a couple of weeks. My initial thoughts are he’s a little bit faster than Jackie Bradley Jr., he maybe doesn’t have the same defensive instincts, maybe a little bit better base runner with more natural power. It always amazes me that there are so many people out there who have never seen these guys before, but think they’re experts because they’ve read a scouting report. There have been a lot of guys who have had reputations while they were here that didn’t mesh with what I had seen. Things like, “Brandon Workman can’t be a starter, he’s more of a reliever”. Well, he looks like a starter to me. He’s starting in the big leagues now. Or “Xander Bogaerts, he can’t play shortstop.” Well, he wasn’t Omar Vizquel, but he was really solid as a shortstop here. The jury’s still out on whether he’s a long term shortstop, but right now he’s the starting shortstop for the Boston Red Sox, and a guy a lot of teams would love to have. It’s fun, I think I’ve developed a pretty good eye for the game and prospects from a scouting aspect.

Do you think about the different paths guys take when you meet these guys? For instance Jackie Bradley Jr. was a three year college player in the SEC, while Manny Margot was signed out of the Dominican Republic as a teenager.

Guys progress at different levels. I’ve seen guys really struggle in the Carolina League, and then go on and play in the big leagues. Drake Britton was a disaster here in 2011, and started to figure it out in 2012, 2013 he’s in the big leagues on a World Series winning team. Caleb Clay hasn’t pitched in the big leagues yet, but went through Tommy John surgery. He came here in 2010, went 4-13 with an ERA just under five, and then went to the Nationals organization, and then Korea, and then the Angels signed him, and he was called up to the big leagues a couple of weeks ago. I still have his number in my phone and I texted him congratulations, and I still remember having really good chats with him about baseball and about life. I’m really happy that I see guys all around the big leagues who came through Salem and are now in The Show. I feel like I have friends all around the major leagues. Anthony Rizzo in Chicago, the guys with the Dodgers like Stephen Fife and Tim Federowicz who played here in 2009, it’s a lot of fun. It’s always a little bittersweet when guys get traded. I can’t imagine Jackie Bradley Jr. making unbelievable plays for someone else in centerfield, but it’s always a possibility that that will happen.

What are your future plans?

I think everyone wants to move up and make it to the big leagues eventually. I want to continue to do more television stuff (Evan also broadcasts ultimate frisbee on ESPN3). The main plan without ever really knowing what’s coming is to use every day and every game to get better and progress. Every day I have the opportunity to do a three hour broadcast, and how can I make today’s better than yesterdays. Hopefully over the season that leads to growth, both in terms of how I sound and in buillding relationships with people. Keep trying to have fun, and hopefully the listeners enjoy it.