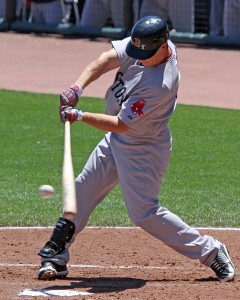 With a series victory within their grasp, the Red Sox took the field behind starter Joe Kelly on Sunday afternoon. After breezing through an easy first inning of work, Boston’s 27 year old starter ran into some trouble in the second and gave Kansas City an early four run advantage. Kelly allowed back-to-back singles to lead off the second inning, then surrendered a long three-run home run to Royal’s first baseman Eric Hosmer. The next two batters followed with a pair of singles, and a run later came around to score on an RBI fielders choice. The next inning Boston quickly began to chip away at Kansas City’s lead, as Xander Bogaerts blasted a change-up into the left field bullpen for a three-run home run. While both Joe Kelly and Jason Vargas endured speed bumps, both starters managed to keep the opposition at bay following the early activity. Vargas only lasted until the sixth, after back-to-back singles sent the veteran to an early exit. Pitching in relief of Vargas, Aaron Crow walked the first batter he faced to load the bases with two outs. A batter later, Daniel Nava deposited the first pitch he saw over the right field fence for a grand slam that gave the Red Sox a 7-4 lead. Four of Boston’s relievers then held off the Royals offense for the remaining four innings, and helped secure the series victory for the Red Sox.