Searching for Means of Improvement in Boston’s Young Starters

The early returns from the Red Sox’s crop of young starters haven’t been pretty, but that doesn’t mean they don’t have any room for improvement.

Although the second half of the season has seen the Red Sox wallow down in the depths of the AL East, the final couple months have given Boston’s front office a chance to assess the club’s future. Ben Cherington has taken the opportunity to give extended playing time to many of the organization’s upper-level prospects, most notably a bevy of young arms.

Rubby De La Rosa, Anthony Ranaudo, Allen Webster, and Brandon Workman have all joined the rotation, though as the Providence Journal’s Brian Macpherson wrote last week, success has been meager at best. Only De La Rosa has shown the readiness to join the Red Sox rotation in 2015. Ranaudo, Webster, and Workman, meanwhile, have done little to prove that their MLB future lies in a starting rotation. (Matt Barnes, as I argued last week, likely has greater promise than any of those three.) 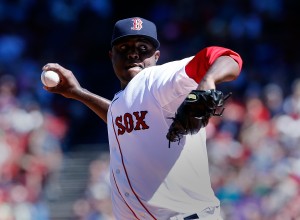 Even still, that doesn’t mean a little tinkering can’t provide improvement for Boston’s young hurlers. While adjustments don’t guarantee major league success, often an additional pitch or a change in approach can help stabilize a pitcher’s development, something that might work for any of the club’s quartet of fledgling starters:

De La Rosa has actually been a consistent performer since joining the rotation full-time in early July. The Dominican native has posted a 4.31 ERA and 4.19 FIP in 17 starts this season, which would be sufficient in the back of a rotation. Still, De La Rosa has gotten by largely with just two pitches, a dynamic fastball and changeup combination. Some nights, that is enough for the right-hander to get through opposing lineups multiple times; yet if he has issues commanding either pitch, De La Rosa is in trouble. His subpar 15.9% strikeout rate indicates that his arsenal doesn’t exactly fool opposing hitters, after all.

Which is why the cutter De La Rosa unveiled in his last start against the Royals is an intriguing step forward in his development. According to Brooks Baseball, the 25-year-old had never before thrown a cutter prior to Saturday night, but he threw the pitch 11 times against Kansas City. The early returns are good (though 11 pitches is by no means a legitimate enough sample size), with De La Rosa garnering two whiffs and giving up just a single with the offering. Cutters can be a good way for righties to attack left-handed batters and pick up extra ground balls, and the pitch could be a way forward for De La Rosa. Either way, he needs to tinker with one more offering along with his fastball and change, which makes the development of his cutter something to watch moving forward.

Ranaudo has probably been the least impressive of Boston’s young starters at the major league level in 2014. The LSU product has posted a 5.01 ERA and 7.33 FIP in just over 30 innings pitched, numbers that give credence to the belief his ultimate future lies in the back of a bullpen. Ranaudo suffers from a similar problem that holds back De La Rosa—the lack of any viable third offering after his fastball and breaking ball. Even more ominous, Ranaudo lacks the mid-90s heat that allows De La Rosa to get away with mistakes, which explains why he has compiled nearly as many home runs allowed (nine) as strikeouts (13).

The 25-year-old has used a changeup and slider sparingly, and he will have to develop one into at least an MLB-average offering if he has any change of sticking in the Red Sox rotation. He has had modest success with his changeup (again sample size caveats apply), with the pitch garnering a 26.7% whiff/swing percentage, per Brooks Baseball. Ranaudo will need to show more confidence in the offering (or his slider) if he wants to improve his performance against lefties, who have crushed him the tune of a .295/.377/.550 line in his short MLB career. 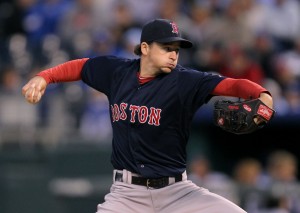 The book on Webster remains the same from a season ago; the right-hander has electric stuff and a deep arsenal of pitches, but his command prevents him from taking advantage of his strengths. His 12.6% walk rate is evidence of this problem.

One way forward for Webster might be to pitch backwards more often, which would allow him to use his stellar offspeed offerings earlier in the count. The 24-year-old’s poor fastball command is well documented, and he has had little success with the pitch this year despite its average velocity of 93.9 mph (opposing hitters are batting .327 with a .584 slugging percentage against his fastball, per Brooks Baseball). Conversely, Webster’s changeup and slider have been far more successful (his change has generated a .203 average against; his slider a .186 average against). Using these offerings earlier in the count, or even when behind, could help generate enough deception and balls put in play to allow Webster to squeeze through opposing lineups despite his poor command.

Workman’s case is a little different from the other three. The University of Texas product has been shuffled between a starting and relief role multiple times this season, which has clearly led to fatigue. The righty’s velocity has dropped from 92.9 mph in April to 90.3 mph in September, and his other pitches are also a couple ticks slower than they were to begin the season. As a result, his fastball has been hit hard (.300 BA/.482 SLG), though his curveball and cutter have remained successful.

The Red Sox should seek to find a consistent role for Workman next year, especially since shuffling between the rotation and bullpen is rarely healthy for a pitcher’s arm. Workman has begun to throw a changeup with relative success, giving him a decent arsenal of pitches with which to attack hitters. The 26-year-old does appear destined for the bullpen, though, which would allow his fastball to play up a bit and his strong curveball to become a force against opposing lineups.