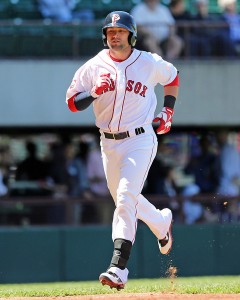 After about a month of waiting, Red Sox fans finally got their first look at Rusney Castillo on Wednesday. The 27-year old Cuban defector assumed the seventh spot in the Red Sox order, and manned center field in his first big league game. After playing in three championships on his rise through the Red Sox farm system, Castillo’s quickly realized that the 2014 Red Sox didn’t share the same success as their lower level clubs. After just two innings, Red Sox starter Clay Buchholz had already surrendered four runs to the Pirates, and only lasted four innings before being lifted from the game. In the Red Sox half of the second inning, Castillo dug in the batters box for the first time as a member of the Red Sox. The Cuban defector jumped ahead in the count 2-1, then chopped the fourth pitch of the at-bat in front of Russell Martin who fired to first to record the out. In his second at-bat of his career, Castillo collected an infield single against Francisco Liriano. After taking the first pitch for a ball, Castillo ripped a grounder to Pirates second baseman Neil Walker, who couldn’t corral the ball in time to beat the speedy Castillo. But Rusney wasn’t the only one who collected his first major league hit on Wednesday, Red Sox outfield prospect Bryce Brentz roped a double for his first MLB hit. Brentz would later come around to score the Red Sox first and only run of the game, on a Xander Bogaerts RBI ground out. The Pirates went on to tally nine runs against Clay Buchholz and Steven Wright, while rookies Matt Barnes and Heath Hembree tallied 3 shutout frames.

At one point in the clubhouse today, Mike Napoli was playing chess against the trio of Betts, Vazquez and Bogaerts. Need to check who won