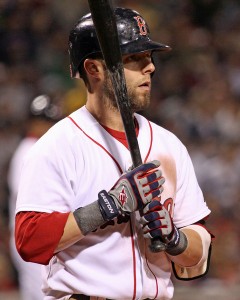 On a clear and chilly September night in Boston, the Red Sox and Rays began their final series of the 2014 season. Starters Clay Buchholz and Alex Cobb held the line for their respective clubs for most of the game, with both starters pitching into the 7th inning. After Buchholz and Cobb exchanged clean innings through the first 3.5 frames, Boston finally jumped on the scoreboard in the fourth after Daniel Nava roped an RBI double to left center field. Pitching with a slim one run margin, Buchholz was tossed three straight clean innings following Nava’s fourth inning RBI. However, in the eighth inning, the wheels began to come off for the 30-year old. With two runners on and two outs, the right-hander surrendered back-to-back RBI hits to Ben Zobrist and David DeJesus, which gave Tampa Bay a 3-1 lead. Buchholz then left the game, and gave way to southpaw Tommy Layne, who inherited a first and second mess. On the second pitch of his outing, Layne made matters worse by uncorking a wild pitch and pushing the runners to second and third. The lefty then allowed a ringing single to first baseman James Loney to score two more runs. All 5 runs in the Rays half of the seventh were charged to Buchholz, who finished the night with a deceiving 5 earned runs on 8 hits. While the Red Sox went on to add their second run in the bottom of the eighth inning on a Jamile Weeks sacrifice fly, Tampa Bay matched it with a Matt Joyce home run in the top of the ninth. Buchholz’ one bad inning loomed large in Tuesday’s game, as the Red Sox lost the opener by a final of 6-2.

The Soup of the Day at @CasknFlagon sounds salty. pic.twitter.com/srLFshvMQg