Joe Kelly has been a steady starter down the stretch, but the Red Sox want him to throw more breaking balls. Could a change in pitch usage aid Kelly in 2015?

Joe Kelly is one of the more unheralded players the Red Sox added before the trade deadline, and his importance to the club’s 2015 outlook is hard to overstate.

Outside of Clay Buchholz, the 26-year-old, who is pitching in his third MLB season, is Boston’s most experienced starter. He is also someone the Red Sox have tasked with helping to replace Jon Lester and John Lackey. Although the team is expected to pursue at least one top starter this offseason, Kelly will remain an important piece of the puzzle as Ben Cherington tries to rebuild Boston’s rotation this offseason.

And while Kelly has certainly had success in his young career, the right-hander has room to improve. Kelly still depends heavily on his sinker, and he could benefit from picking up a few more strikeouts. 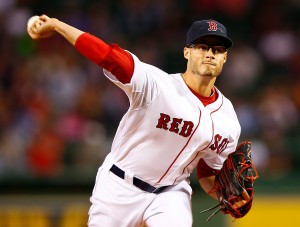 To that end, after his first start for the Red Sox, John Farrell acknowledged the club would like Kelly to use his curveball and changeup more often. The team is wary, in other words, that Kelly can become too “fastball-oriented” at times.

Now that he has made nine starts for the Red Sox, has Kelly shown any more faith in his secondary offerings? Moreover, are there any changes he can still make to improve in 2015?

Since arriving in Boston, Kelly’s overall pitch usage has changed little compared to his time in St. Louis earlier this season. The right-hander has actually increased his sinker usage with the Red Sox and still throws his fastball and sinker nearly 70% of the time, according to Brooks Baseball.

And Kelly has good reason to depend on his harder offerings. He can be a groundball machine, with his 55.6% groundball rate ranking 10th-best among MLB starters and far better than anyone else on Boston’s staff. Having the consistent ability to generate grounders is a valuable skill to have, especially in a place like Fenway Park.

But to further develop and improve as a pitcher, Kelly will need to trust his offspeed stuff in much the same way the Red Sox are stressing. While with Boston, Kelly is throwing his curveball and changeup at nearly the same rate that he did with the Cardinals:

On the surface, at least, it doesn’t appear the Red Sox have been successful in getting Kelly to alter his approach. Yet a closer look reveals some subtle changes in Kelly’s pitch usage. Against left-handers, Kelly has turned to his curveball more often, especially on the first pitch of the count when he now throws the curve 27% of the time (most likely to steal a strike and give batters a different look). The approach is similar to what Clay Buchholz has done against lefties in recent outings, and it can be a good way to throw a wrinkle into what a hitter is expecting to see.

Thus far, Kelly’s curveball has yielded some good results as well, suggesting the Red Sox are smart to encourage him to throw his breaking ball more often. Since arriving in Boston, Kelly’s curve has yielded a .148 batting average and .148 slugging percentage against, numbers similar to how the pitch fared in St. Louis, per Brooks Baseball.

Against righties, moreover, Kelly has increased his slider usage by nearly 10%. The offering hasn’t been nearly as effective as his curveball, however, with opposing batters hitting .364 and slugging .727 after the pitch also got crushed during his time with the Cardinals.

That Kelly has made even slight changes to his approach is encouraging to some extent. His curveball looks to have solid potential, and it’s proven effective against lefties.  But the righty could stand to trust the offering even more moving forward, and his slider hasn’t yielded much success. Perhaps throwing his slider harder and using the pitch as more of a cutter, something a number of pitchers have done across the league in recent years, will help him generate better results.

Finding another pitch to trust will be key for Kelly’s development and performance in 2015, and you can bet the Red Sox feel the same way. Kelly will have all offseason and spring training to grow more comfortable with his secondary offerings. Considering how dominant his sinker can be, just one more pitch with which to attack hitters could make a world of difference for the 26-year-old.

The Red Sox will need a big year from Kelly next season even though the club will be in the market for pitching help this winter. That Kelly has found major league success already is encouraging enough. He can be better, though, and the continued progress of his secondary offerings will be worth keeping an eye on.