Monday Links: It’s all over 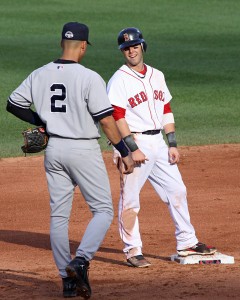 The Red Sox and the rest of major league baseball bid a fond farewell to Yankee’s Captain Derek Jeter over the weekend, as the 40-year old played the final series of his 20 year career. After Boston and New York split the first two games of the weekend series, the bitter rivals took Sunday’s game 162 to honor Jeter, and the legacy he left behind. Before the game, the Red Sox held a lengthy ceremony on the field, featuring former Boston sports captains like Troy Brown, Bobby Orr, and Paul Pierce. The Red Sox then presented Jeter with a sign from the Green Monster’s manual scoreboard that read “Re2pect”, and a pinstriped second base bag. Following the pregame festivities, Michael Pineda — sans pine tar — and Clay Buchholz — sans bullfrog — took the mound for their respective clubs. After two straight scoreless frames for both starters, the Yankees hung a 4 spot on the scoreboard in the 3rd inning. With runners on first and second, Ichiro Suzuki grooved a bases clearing triple to the triangle in right-center field. Derek Jeter then strolled to the plate for what would be the last time in his career. The Yankee Captain collected an RBI single on a high chopper to third baseman Garin Cecchini, and was promptly lifted for a pinch runner. Jeter left the field to thunderous applause from the Fenway crowd, and even stopped by the pitchers mound to shake Buchholz’ hand. New York wound up scoring 4 runs in the 4th, and further widened in the 7th by scoring 5 runs. Down 9-0, Boston scored 5 runs of their own in the home half of the 7th, highlighted by RBI doubles by Dan Butler and Mookie Betts. However, the Red Sox were unable to overcome the 9-5 deficit, and fittingly ended the 2014 season with their 91st loss.

Heads up, Red Sox fans. They have the 7th pick in the draft, the future is bright, Ben Cherington has a plan, and there is money to spend.