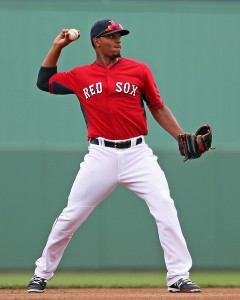 The 2014 MLB playoffs officially get underway tonight, as the Oakland Athletics take on the Kansas City Royals in a win or go home Wild Card game. The opening contest will feature a pair of impending top flight free agents in Jon Lester and James Shields, both of whom have a knack for rising to the occasion when the spotlight is at its brightest. For Red Sox fans, Lester’s prowess as a proven playoff arm needs no introduction. In 11 career postseason starts, the southpaw holds a 1.97 earned run average and an equally impressive 1.04 WHIP. After another solid season on the mound, which saw the 30-year old toss over 200 innings for the third straight year and post an ERA below 3.00, Lester seems poised to add to his postseason resume. Similar to Lester, Royals starter James Shields has also been battle tested in postseason during his time with the Rays. While the 32-year old doesn’t have quite as much success in the playoff as Lester does, Shields has started 6 career playoff games and was an integral part of the 2008 Tampa Bay Rays run to the World Series. In 227 innings this season, Shields posted a respectable 2.31 ERA and averaged about a strike out per inning. In his last 6 starts of the season, the right-hander averaged 7 innings per start and held opponents to a .199/.228/.295 slash line.

Sox fan Gerald Wallace disappointed to say the least: "Yeah, worst to first and back to worst."