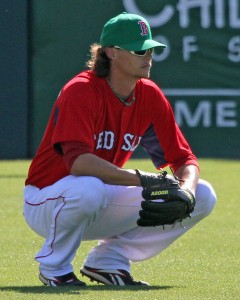 The 2014 MLB postseason kicked off with a bang on Tuesday night, as the Oakland Athletics and Kansas City Royals battled for 12 innings in the win or go home American League Wild Card game. On paper, the winner take all contest appeared to favor pitching, as both teams were set to send their ace to the mound. However, both the A’s and the Royals came out swinging and opened the scoring early. In the top of the first, Oakland jumped out to a 2 run advantage after Brandon Moss drove a Shields offering into deep left. Kansas City, however, was quick to respond as they tallied a run in the home half of the inning on an RBI single by Billy Butler. Down a run, the Royals went on to take the lead in the bottom of the third inning on back-to-back run scoring hits by Lorenzo Cain and Eric Hosmer. An inning later, Brandon Moss once again tipped the scale back in favor of the A’s, as he collected his second home run of the game off Shields — this one of the three-run variety. Derek Norris and Coco Crisp followed Moss’s blast with a pair of RBI singles. Down 7-3, the Royals mounted a 3-run rally in the 8th inning and whittled their deficit to one run. But their comeback wasn’t yet complete and life only got harder for the Royals with A’s closer Sean Doolittle on the hill in the 9th. But the Royals remained poised in finishing the comeback and rallied in the 9th to tie the game at 7. After threatening to score but ultimately leaving runners stranded, both teams traded back-to-back scoreless frames in the 10th and 11th. Josh Reddick lead-off the 12th inning with a walk, and was later advanced to second on a sacrifice bunt. Alberto Callaspo then followed with an RBI single to give the A’s a one run lead. After an Eric Hosmer triple lead off the home half of the 12th, Kansas City again tied the score on an infield single by Christian Colon. One batter later, Royals catcher Salvatore Perez atoned for his 0-for-5 night at the plate, and line a single down the left field line to score Colon from second. Perez’s walk-off single assured the Royals a Divisional Series match-up against the AL West winning Anaheim Angels.