The Red Sox entered 2014 with high expectations following the World Series championship campaign of 2013. Those expectations were dashed during a disastrous season which saw the Red Sox finish under .500 for the second time in three years. Despite this underwhelming performance, there are reasons to be optimistic for next year. Here are three reasons why the Red Sox should be competitive in 2015.

1. They have money to spend in free agency

The club offloaded 3/5 of the opening day starting rotation at the 2014 trade deadline, so there are certainly holes in the rotation. However, the financial flexibility gained in the 2012 Nick Punto trade with the Dodgers still remains.

Dustin Pedroia, Rusney Castillo and Allen Craig are the only members of the club signed past 2015 (David Ortiz and Clay Buchholz have option years). Team Chairman Tom Werner has stated openly that the Red Sox will spend aggressively in the free agent market to strengthen the team. Alex Speier wrote in a recent article that the club should have around 50$ million to spend this offseason. With this much money, it’s reasonable to expect some high impact acquisitions to help the club in 2015. 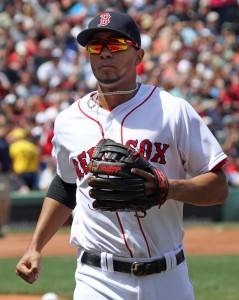 Talented young players from the farm system made the club in 2014, and more are on the way. The 2015 club should feature homegrown starters at shortstop (Xander Bogaerts), catcher (Christian Vazquez) and the outfield (Mookie Betts), plus a bevy of other young depth options on both the field and mound.

Despite all this graduation of young talent to the majors, the Sox minor league system remains both deep and talented. The depth shows in the amount of options the club will have next year for both the rotation and bullpen. The talent will be reflected in the offseason prospect lists, where the Sox should have 6-8 prospects in the industry top 100 lists.

This talent and depth impacts the team in two ways. One, they have the quality and quantity to go after an established star (Chris Sale, Cole Hamels, Giancarlo Stanton) in a trade if they want to.  The second impact is if trades are made, there will still be quality remaining in the farm system. Just as an example, the Sox have four talented left-handed starting pitching prospects that finished the season in Triple A. The club could lose two in trades and still have enviable depth for the major league rotation.

It was difficult and emotional to lose Jon Lester, a homegrown star who had won two championships with the club, at the July trade deadline. Even with Lester gone, several of the core stars who had such a major impact in the 2013 title run remain. David Ortiz and Dustin Pedroia are the club’s key leaders, and the hope is that Clay Buchholz, and Shane Victorino rebound from a year marred by injuries and diminished performance.

The chance remains that none of these players will rebound to the levels they reached in 2013. Still, with the returning veterans, the new core of young players, and the talent brought in at the trade deadline, the Red Sox resemble a retooling club rather than a rebuilding one. And what could possibly make one more optimistic then some new tools?