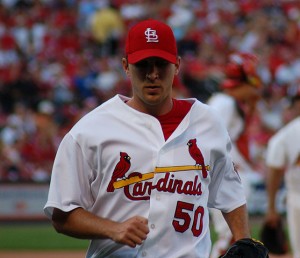 While the American League championship series is set to kick off tonight, the National League side of the playoffs won’t get underway until Saturday. The San Fransisco Giants and the St. Louis Cardinals are no strangers to each other in the postseason, having met most recently in 2012. In their series 2 years ago, the Giants came out victorious after falling down in the series 3 games to 1, and winning in 7 games. In 7 regular season meetings this season, the Giants hold a slight 4 games to 3 series advantage. While the Giants have yet to announce who will toe the rubber for them in game 1 on Friday evening, the Cardinals have decided to send out Adam Wainwright. The ace of St. Louis’ staff is coming off another dominate campaign atop the Cardinals rotation in which he won 20 games, posted an ERA below 3.00, and pitched over 200 innings for the fifth time in his career. While 32-year old’s first postseason start saw him surrender 6 runs in 4.1 innings, his career playoff numbers predict a more polished pitcher will show up this time around. In 10 career postseason starts, Wainwright holds an ERA of 3.13, while averaging 10 strike outs per 9 innings. Over the course of his career, the Georgia native has enjoyed moderate success against his NLCS opponents, posting a 3.11 ERA in 10 starts against the Giants.