Despite Andrew Miller’s dominance out of the bullpen, acquiring Eduardo Rodriguez at the trade deadline was a coup for the Red Sox.

The Red Sox were a busy team prior to the 2014 trade deadline, making multiple deals in a flurry of activity as the clock ticked down on July 31. Jon Lester and John Lackey were the biggest names to be traded, of course, but Ben Cherington made some other shrewd moves that got overshadowed by the day’s more high-profile trades.

One of Cherington’s smartest decisions was sending reliever Andrew Miller to the Orioles for lefty pitching prospect Eduardo Rodriguez. Miller had been a rock for the Red Sox out of the bullpen, and he’s been even better for the Orioles down the stretch and in the postseason. Since arriving in Baltimore, the 29-year-old Miller has compiled 41 strikeouts and five walks, while allowing just three earned runs in 26 appearances. There is no denying that Miller’s level of dominance is rare and difficult to replace. That the left-hander will command a multi-year contract approaching $20 million in total this winter is exemplary of this fact. 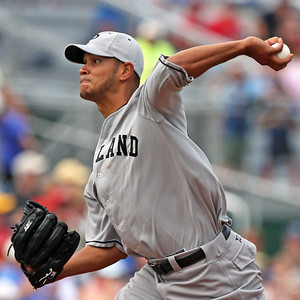 But relievers can only provide so much value, and with Miller set to hit free agency, the Red Sox did well to acquire someone with Rodriguez’s level of talent for just over two months of Miller. Ranked as the No. 65 prospect in the minors by Baseball America and No. 61 by Baseball Prospectus prior to 2014, Rodriguez has a strong chance to at least be a back-of-the-rotation starter in the majors.

If he continues to pitch like he did in the month of August following the trade, however, Rodriguez could prove to be even better than that. In six starts at Double-A Portland, Rodriguez posted a 0.96 ERA, struck out 39 batters and walked eight in 37.1 innings pitched. Even more encouraging, the southpaw enjoyed a spike in velocity upon arriving in the Red Sox organization, with his velocity more consistently sitting in the 93-96 mph range (an uptick from the 90-93 he averaged earlier in the year) down the stretch, according to FanGraphs prospect writer Kiley McDaniel.

In his overview of the Red Sox system Tuesday, McDaniel even went so far as to rank Rodriguez as the No. 2 overall prospect (and top pitcher) in the club’s farm system behind catcher Blake Swihart. That would be ahead of heralded lefty Henry Owens (No. 3)  and Rusney Castillo (No. 4), whom the Red Sox signed to a seven-year, $72 million contract in August.

A couple sources suggested the Red Sox had their choice of Rodriguez or three pitchers from the Tigers in exchange for Miller. Two of those offered pitchers appear to be the two that Detroit sent to Texas for reliever Joakim Soria: RHP’s Jake Thompson and Cory Knebel, both highly ranked on my recent Rangers prospect list. It seems Boston’s decision was a classic quality over quantity and, so far, it looks like they chose right.

That Miller drew such interest at the deadline is unsurprising; that the Red Sox chose to trade for Rodriguez with other offers on the table speaks volumes about what they think of his potential.

With Rodriguez having 180 innings of Double-A experience under his belt, moreover, he shouldn’t be too far away from making an impact in the major leagues. He already possesses two solid offspeed pitches, and if his fastball can miss bats as it did towards the end of 2014, Rodriguez’s future potential grows considerably.

The addition of Rodriguez only reinforced Boston’s impressive pitching depth in the upper minors. With Owens and fellow lefty Brian Johnson (who earned the club’s Minor League Pitcher of the Year award after finishing with a 1.75 ERA in 20 starts at Portland), the Red Sox boast three highly regarded southpaws who could all pitch in the majors as soon as next season.

Of course, not all the young talent the Red Sox have stockpiled will reach the majors with Boston.  Trade speculation is already swirling (and has been since the deadline), and Cherington certainly won’t just be sitting around twiddling his thumbs this offseason. That doesn’t mean Red Sox fans should be any less excited about all the youngsters pushing to break into the club’s major league roster, Rodriguez included.