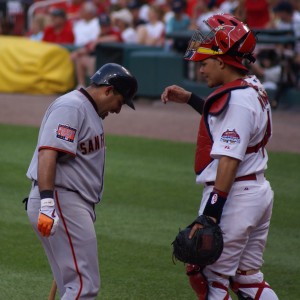 The San Fransisco Giants took a one game series advantage on Tuesday, after they beat the St. Louis Cardinals in unorthodox fashion. Starters John Lackey and Tim Hudson battled for their respective clubs for 6 innings, and left the game after allowing 4 runs. The Giants jumped out to a first inning 4 run advantage, after 5 straight San Fransisco batters reached base with two outs. With runners on first and second, Hunter Pence drove an double to right field to plate a run. After Lackey intentionally walked Brandon Belt to load the bases, Travis Ishikawa grooved a double to center field, and drove in all 3 runners. For the Cardinals, Kolten Wong continued to be a spark plug in the middle of their order, as the second baseman collected a double in the 2nd inning and a 2 RBI triple in the 4th. Down by a run in the 7th, Cardinals rookie outfielder Randal Grichuk drilled his first home run of the series to knot the score at four. With Lackey and Hudson out of the game after the 6th inning, both team’s bullpens held the line effectively, and sent the game into extra innings. In the 10th inning, Cardinals left-hander Randy Choate allowed the first two batters that he faced to reach base. With the winning run on second base and nobody out in the inning, Giants outfielder Gregor Blanco hoped to bunt the runners over a base and stay out of a double play; but he ended up doing a whole lot more than that. Blanco dropped a bunt right in front of the pitchers mound, but Choate through the ball wide of the first base bag and into right field foul territory. Brandon Crawford came around to score the winning run, and give the Giants a 2-1 series lead.

33 MLB teams have fallen behind 3-0 in a best-of-7 series. Only 1 team has ever overcome that deficit: 2004 Red Sox. pic.twitter.com/bVgGLFtpBV