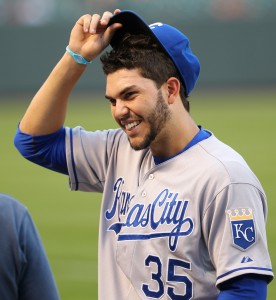 No, that wasn’t some crazy dream that you had last night; the Kansas City Royals are in the World Series. For the first time since 1985, Kansas City is heading back to the MLB championship after they completed a 4 game sweep of the Baltimore Orioles. The Royals wasted no time jumping out to an early advantage against Orioles right-hander Miguel Gonzalez on Wednesday afternoon. Alcides Escobar lead off the home half of the first with a single, and Nori Aoki followed with a hit by pitch. Lorenzo Cain then laid down a sacrifice bunt, which pushed the runners into scoring position. Kansas City first baseman Eric Hosmer put the Royals out in front in with a little help from the Orioles defense. Hosmer dribbled a routine grounder to second base, but instead of taking the sure out at first base, Orioles second baseman Ryan Flaherty tried to cut down Escobar breaking for the plate. However, catcher Caleb Joseph couldn’t corral the throw, and both Aoki came around to score as well. Two runs wasn’t a ton of run support, but it turned out to be all Royals starter Jason Vargas would need to keep the Orioles at bay. The 31-year old right-hander pitched into the sixth inning, and allowed just one run on two hits and three walks, while punching out six Oriole batters. Like they have this entire postseason, the Royals bullpen held strong following the starter. Kelvin Herrera, Wade Davis, and Greg Holland combined to toss three and two thirds innings of 2 hit, shutout baseball. After allowing a walk to lead off the 9th, Royals closer Greg Holland retired the next three batters in a row, and punch KC’s ticket for the fall classic. The Royals are no fluke this postseason, they still have yet to lose a game, after sweeping both the Angels and the Orioles.