In February I wrote that I felt Swihart “will hit for more power in 2014 and end the season as the top catching prospect in the minors”. This definitely happened, as Swihart increased his home run total from 2 in 2013 to 13 this season, and increased his slugging percentage by 40 points. 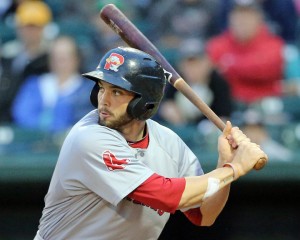 There will be debate this offseason over which catching prospect is the best in the minors, but Swihart should lead most lists. He’s the rare catching prospect that grades as above average on both offense and defense. Kiley McDaniel of FanGraphs.com has Swihart as his number one prospect in the Sox system, and wrote that the Red Sox have “labeled him the only untouchable player in the system.”

Margot entered 2014 having only played short season baseball in the Red Sox system. Despite his limited time number of games, SoxProspects had him ranked #12 in their preseason rankings. I felt before the season that he would begin to have more success at the plate as he gained more experience.

Margot did improve at the plate, hitting .293/.356/.462 across two levels with 12 home runs and 42 stolen bases. He has tremendous potential as an excellent defensive centerfielder with both speed and power. He’s now ranked as the #3 player in the system according to SoxProspects.

Health limited Johnson’s success in his time in the Sox system before this season. He had only thrown 90 innings in two seasons before 2014. Healthy for the entire season this year, he showed the stuff that led the Red Sox to make him their number one pick in 2012.

He was 10-2 with a 1.75 ERA at Double A Portland, dominating hitters with his low 90’s fastball and above average offspeed pitches. He’s ranked #6 in the system by SoxProspects, and should challenge for a spot in the big league starting rotation some time in 2015.

I cheated a bit by picking two pitchers who had had successful seasons for the Lowell Spinners in 2013. I figured one of them would take a step forward this season. Instead, both struggled to build off their performance, and have a lot to prove in 2015.

In a recent recap of Callahan’s season, SoxProspects noted that Callahan was throwing his fastball in the mid 90’s at the start of the season, but was down to lower velocities by the end of the season. He also struggled with his secondary pitches. Buttrey did not make a full season club out of Spring Training, then struggled once his season began. These two pitchers still have time to succeed as prospects, but did not make many developmental strides this season.

I wrote before the season that Kukuk “has the stuff to overpower hitters, but at times in 2013 was his own worst enemy”. The stuff remains excellent, but the trend of self-sabotage continued this year. Kukuk struck out over a batter per inning (116 Ks in 103 innings in 2014) but also walked way too many hitters (83 walks).

The potential still remains for Kukuk to establish himself as a top starting pitching prospect. His command and control hold him back, though, and he may wind up in the bullpen if he can’t harness his arsenal.

I did pretty well predicting prospect breakouts for 2014, nailing my first three picks. I failed on three out of four pitchers, which I think shows how difficult it is to predict performance from young pitching prospects. Hopefully I’ll take the lessons from this season and use them in 2015.