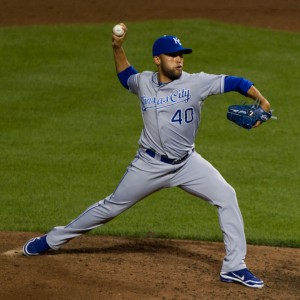 Baseball hit a pause over the weekend, as the San Francisco Giants and Kansas City Royals prepared for game one of the World Series, set to take place on Tuesday night. While this week’s meeting against the two teams will mark their first time together as World Series foes, they aren’t exactly strangers on the baseball diamond. Although we didn’t know it at the time, Kansas City and San Fran played a World Series primer in August during the regular season. The Royals swept the Giants in three games at Kauffman Stadium, winning each game by at least three runs. Despite the sweep, Giants ace Madison Bumgarner managed to toss an 8 inning, 4 run contest, while Tim Hudson allowed just three runs in 6 innings of work. The Royals arms held the Giants bats in check over the three games, a managed to limit San Francisco to six runs over the entire series. Of course, these three regular season games hardly hold any barring on the outcome of the World Series, but the white-hot Kansas City Royals have destiny and momentum on their side. Conversely, the Giants have the talent and playoff pedigree on the roster to make for a hard fought series.