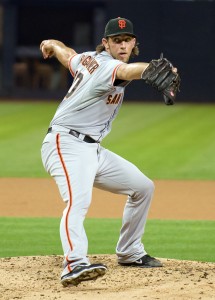 After five days off, the San Francisco Giants and the Kansas City Royals are set to begin the 2014 World Series tonight at Kauffman Stadium on Tuesday night. Madison Bumgarner and James Shields will toe the rubber for their respective clubs in game one of the best of seven series. The Giants left-hander has been on a torrid pace so far this October, boasting a 1.42 ERA in over 30 innings pitched. In Bumgarner’s 4 starts, the Giants ace has only allowed batters to reach base at a 0.76 clip. James Shields, on the other hand, hasn’t enjoyed the same success as Bumgarner has this fall. In three starts, the Kansas City ace has collected 16 innings pitched, and holds an ERA north of 5.00. Shields sandwiched a solid start against the Angels in the ALDS, in between a bad Wild Card game outing and a sub-par showing in his only ALCS start. While Shields doesn’t have much of a career against the Giants, he did hurl a notable outing against his World Series foes earlier this season. In his only start against San Francisco, Shields tossed a complete game shutout, surrendering just four hits while walking one and punching out five. Similarly, Shields’ counterpart in game one doesn’t boast a long history against the Royals, but does feature a notable 2014 regular season start. In August of this year, Madison Bumgarner tossed 123 pitches in eight frames and allowed four runs on seven hits, in a 4-2 loss to Kansas City. While neither starter’s brief history against their opponent means much of anything (especially in the playoffs), both pitchers know the importance of grabbing an early series lead, an will try and do so on Tuesday evening.