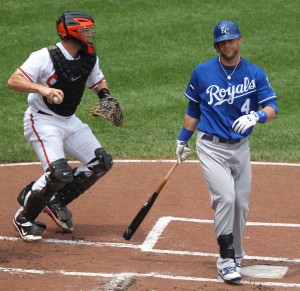 It didn’t take long for game one of the World Series to quickly transform into the Madison Bumgarner show on Tuesday night. The Giants left-hander continued his torrid postseason stretch by tossing seven innings of one run baseball, allowing just three hits and a walk along the way. The 24-year old has now amassed 38.2 frames this postseason, and has held opponents to a .162 batting average. In support of Bumgarner, the Giants offense erupted against Royals starter James Shield. After the Giants put runners on first and second with just one out in the first inning, Pablo Sandoval opened the scoring with a run scoring double. Gregor Blanco came across to score, but Buster Posey was cut down at the plate by Kansas City right fielder Nori Aoki. With a runner still on, Hunter Pence followed Sandoval’s double with a 2-run home run. Two innings later, San Francisco tacked on two more runs to their total on the strength of a Michael Morse single, and a Gregor Blanco bases loaded walk. When all was said and done, the Giants took game one of the series by a final of 7-1. However, Kansas City won’t have to stew on the for too long, as game two of the series is set to take place on Wednesday evening.