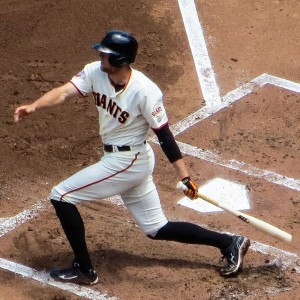 It’s been a battle so far this fall, but the San Francisco Giants just keep plugging along. After entering the postseason as the National League Wild Card winners, the Giants are blew past the Washington Nationals, en route to a five game NLCS victory against the St. Louis Cardinals. Now, the Giants hold a 3-2 series lead, and are just one win away from their third World Series crown in the past four seasons. Whether it’s pitching or hitting, the Giants have found different ways to take care of business on the field. During Game 4 on Saturday, the team erupted to score eleven runs against the Royals typically stingy group of arms. Hunter Pence added to his impressive highlight reel this October, and collected 3 RBI including a run scoring double. In total, six different Giants batters tallied RBI’s during Game 4, and together they amassed eleven runs. Sunday’s game, on the other hand, followed a bit of a different path than it’s predecessor. While the Giants bats stayed hot and managed to push five runs across the plate, Madison Bumgarner’s left arm made it virtually impossible for the Giants to lose. San Francisco’s young southpaw lowered his 2014 postseason ERA below 1.00 by tossing a complete game shutout, striking out eight and not issuing any free passes. Since the American League won the All-Star game the series will now shift back to Kauffman Stadium in Kansas City, where the Giants will have two chances to put the finishing touches on the World Series.

Oscar Taveras has died in a car accident. Our thoughts go out to his family and loved ones. pic.twitter.com/6hnE2hQTdA