With MLB’s Hot Stove season now just a couple weeks away, focus is beginning to shift toward who the Red Sox will target during a highly anticipated offseason. The club’s moves prior to the trade deadline left a gaping hole in Boston’s starting rotation, but Ben Cherington has indicated the Red Sox will also be in search of a left-handed bat to add to a lineup filled with right-handed hitters.

Whether Boston simply brings in a lefty bench bat, or settles on a bigger upgrade remains to be seen.  Beyond the rotation, third base is the one position with no current solution, as Will Middlebrooks remains anything but a certainty, and Garin Cechinni needs more seasoning before he is a full-time option in the majors. Brock Holt’s second-half numbers–.219/.278/.271 in 213 plate appearances—provided strong evidence that he isn’t the answer either.

For these reasons, the Red Sox continue to be linked with free agent third baseman Pablo Sandoval. Indeed, Peter Gammons wrote Monday that some within the Giants organization believe Sandoval will ultimately end up in Boston. Sandoval certainly has his drawbacks—he can be inconsistent, his performance has declined in the last few years, and his conditioning issues don’t bode well for a player approaching his thirties. 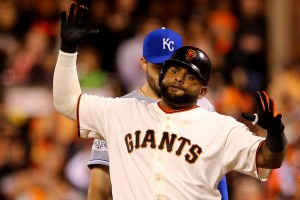 But the Red Sox would be smart to add firepower to an offense that finished 11th in the American League in runs scored this past season, even if they expect Mookie Betts and Rusney Castillo to provide a boost. And they don’t have any other open spots in the lineup to upgrade.

The question is whether someone like Sandoval is worth the risk, especially if his price tag nears the $100 million mark. His production has dipped the past three seasons after Sandoval’s career year in 2011. Still, the Venezuelan native is an above-average hitter and has performed well even in the spacious confines of AT&T Park, one of the league’s most generous environments for pitchers.

Over the past three seasons, Sandoval has hit .280/.335/.424, producing offense at roughly 15% above the league average rate (115 wRC+), according to FanGraphs. It is hard to tell how his power would play in a friendlier environment for hitters. What’s more, Sandoval’s defense is hard to project as well. Both UZR and Defensive Runs Saved rated the Panda’s defense as above average in 2014, though putting too much stock into one year’s worth of data is risky. In the past, Sandoval has rated as slightly below average, and given his weight, one can imagine his defensive performance at the hot corner deteriorating as he ages.

Sandoval’s approach at the plate also makes him a bigger question mark than someone with his track record would normally be. The 28-year-old’s free-swinging ways are well documented, and his contact rates both inside and outside the strike zone have held steady, meaning there doesn’t appear to be any impending sign of decline.

Even so, if Sandoval’s physical skills were to decline in any way, his production might take a bigger hit than would normally be anticipated. At this point, expecting Sandoval to develop a more patient approach at the plate is a fool’s errand, and overly aggressive hitters on the wrong side of 30 don’t have an especially great track record (i.e. Josh Hamilton). Sandoval’s decline, in other words, could be precipitous.

These risks make Chase Headley, the other top third baseman on the free agent market, another option. Headley, too, spent his prime years in a pitcher’s paradise at Petco Park, which makes his offense hard to project as well. The 30-year-old is one of the best defensive third baseman in baseball, however, meaning he can provide value without the bat. And it’s not like Headley is a liability on offense; his 123 wRC+ dating back to 2012 is actually higher than Sandoval’s, and other third baseman like Ryan Zimmerman and Kyle Seager.

Given his age (he turns 31 next May), Headley will also come a bit cheaper than Sandoval. As Brian Macpherson of the Providence Journal wrote Tuedsay, offering Headley a four-year deal in the $80 million range might just be a shrewder decision than taking a gamble on how Sandoval will age over the next five years.

Regardless, the Red Sox should be willing to spend money to bring in a solution at third base. Cherington will look awfully foolish if June comes around again, and Middlebrooks is toiling away with yet another sub-.250 on-base percentage with no other dependable option in sight. Sandoval could be a big upgrade, and there is no denying he has performed well repeatedly on the big stage for the Giants (regardless of what you think of postseason statistics).

Either way, if the Red Sox decide to roll the dice on Sandoval or sign someone like Headley, there is no reason to be frugal this offseason. Despite the disappointment of 2014, Boston has a real opportunity to climb back among the division’s elite next year. The Rays are a big question mark without David Price, Joe Maddon, and Andrew Friedman, while neither the Jays nor the Yankees look well set up for the future. Baltimore, too, despite an impressive playoff run, is no certainty to repeat their 96-win campaign.

In other words, another trip to October is well within reach, and upgrading third base would be a good step in that direction.