The Meaning of Money

The baseball season, despite our pleas, is over. The San Francisco Giants have stunningly won it for the third time in five years and now the winter – the long, long winter – begins again. With no baseball comes withdrawal and, for lack of better words, relative insanity.

Will the juice be worth the squeeze?
Photo by Kelly O’Connor of sittingstill.smugmug.net

Despite budget restrains and general common sense in some cases, fans will want teams to pick the finest players off the shelves and throw money at them until they slip on a Benjamin and stumble right into their team. The thing is though, that’s not how money should be used. The team “flexing their financial muscle” has been said to describe a team being able to pay more money than another. While that’s not an awful thing, the arrival of advanced stats has signaled that money has become a hoarder’s item.

Just because you have buckets of cash doesn’t mean you buy everything shiny that you see. It means so much more than that.

Money, in a basic sense, widens the margin of error a team has.

That’s really it. We will criticize any bad deal a team makes, but if it’s done by a high-payroll team like the Red Sox, we can take it with a grain of salt. The Red Sox have the resources to bounce back from moderately-sized bad deals. That’s what money does. It’s a buffer zone between a team and failure, to put it simply.

The Rays? They have no room for mistakes. Their margin is thinner than a sheet of paper. Andrew Friedman, when he was still Tampa Bay’s general manager, had to make trades to relieve the pressure. James Shields for Wil Myers, David Price for…well, warm bodies, and so on. The team simply cannot recover from bad deals. There is no backup plan. The money’s just not there. 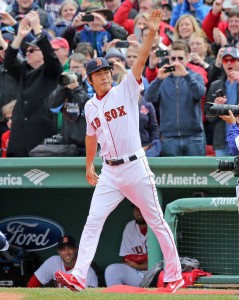 A resounding success by the front office in Koji.
Photo by Kelly O’Connor of sittingstill.smugmug.net

In 2013, we saw what happens when the Red Sox act like the Rays and act like they have no margin at all. Ben Cherington brought on quite a few players in shrewd deals: Koji Uehara, a guy with a busy injury report but a couple great fastballs; Stephen Drew, a great defense shortstop that could also contribute light power hitting and hit better than the Mendoza Line; Jonny Gomes, a strict platoon guy with a mean power bat against lefties (and, occasionally, against righties too).

Those deals? They’re all what a smart low-payroll team would do. Flawed guys with great aptitudes for certain parts of the game, be it relief pitching, defense, or pitcher matchup hitting. The Chicago Cubs are starting to do this too (see: Jake Arrieta), and their massive talent pool in the minors has pushed their margin out even further. That should terrify any team with a smaller payrolls than them.

We’ve also seen time and time again how a team with tons of money crashes and burns miserably. The Philadelphia Phillies spent unwisely with their gratuitous financial resources and their margin of error was gone faster than you can say Ryan Howard. The New York Mets unceremoniously fell out of the sky in the late 2000s, and the New York Yankees may soon see a fall from grace, as a few literal tons of money are tied up in contracts with old, declining players.

What it comes down to is this: it allows a team to spend a bit more than other teams because it can take the hit. Let’s say both the Red Sox and Rays are in the market for, say, Jon Lester. The Rays offer something like 5 years and $80 million, because that’s how they grade Lester’s worth going forward. They can’t spend any more in fear that a Lester deal of that length may go bad. So they’re conservative with the cash. The Red Sox counter with a 5-year, $95 million deal, trouncing the Rays and all but making Jon Lester theirs. It’s those resources – those extra vaults full of money – that make the difference here. The Red Sox can stomach Lester being bad. The Rays, ultimately, cannot.

Money’s a cushion, in the end. A protective shield between a team and impending doom. The small-payroll teams have acted like there is no margin for error – because there isn’t any for them. They’ve had to operate under that premise. Now imagine their terror once the big-payroll teams act like that. The Red Sox and Cubs have started the trend. This winter, they’ll show everyone how much better that makes them.