Friday Links: And suddenly there was no more baseball 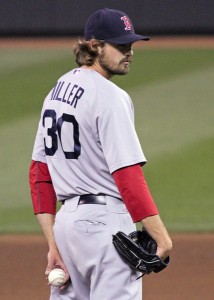 The Boston Red Sox will enter the 2015 offseason with a plethora of questions to answer before reconvening in Fort Myers in February. After the departures of Jon Lester, John Lackey, and Jake Peavy at the trade deadline last year, the starting rotation is obviously a position that will require a lot of attention this winter. Jon Lester, Max Scherzer, and James Shields all headline the 2015 free agent market, and are all logical fits atop the Red Sox rotation if the money is right. Of course, there is always the trade front from which to find a top of the rotation starter. Early speculation has the Red Sox matching up in trades for pitchers like Philadelphia left-hander Cole Hamels, or Cincinnati ace Johnny Cueto. Following starting pitching, the Red Sox will also look to upgrade at third base, a position that received little to no consistency from multiple players throughout the 2014 campaign. However, there really is no “quick fix” for third base, given the free agent options are slim and the trade market doesn’t look promising. Certainly, things can change on the trade front, but for right now it seems like Boston will have to choose between Pablo Sandoval and Chase Headley. The bullpen could also use some reinforcements now that Andrew Miller and Burke Badenhop have declared free agency. While the Red Sox have expressed interest in bringing both arms back to their squad, Miller and Badenhop will see a lot of activity from other clubs looking to solidify their relief core. Amid all the additions that Boston will need make this winter, the Sox will also have to make some subtractions. Simple logic tells us that the Red Sox have too many outfielders to accommodate for in 2015, but figuring out just who to trade is easier said than done. Among all the questions the Red Sox have to answer this winter, the good news is that they’re fully prepared to rebuild the team. Boston will enter the offseason with around $40M to allocate to free agents, a fund that has already tapped into after the 2 year, $9M pact given to Koji Uehara. If the Red Sox can’t find anything to their liking on the free agent market, the team has a few trade chips that they can use to try and bring in an impact player.

Point is – if people want them to be competitive next year, they're going to have to prepare themselves for some uncomfortable deals.