Joe Maddon’s sudden departure from the Tampa Bay Rays last week caught all of major league baseball by surprise. With a manager considered one of the best in baseball a free agent, teams around the league had to take a long look at their incumbent manager. GM Ben Cherington for the Red Sox quickly stated that the Sox are happy with John Farrell’s performance. With one wildly successful season and one poor season as the Sox manager, how does Farrell rate among major league managers? 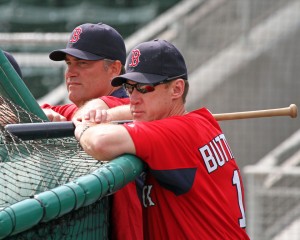 It’s always difficult to assess how good a manager is behind the scenes, but all evidence points to this being an area where Farrell excels. His former association with the team as the pitching coach meant he already had relationships in place with many of the key players. He pushed all the right buttons during the 2013 championship run. The grumbling and dissension in the clubhouse that marked Bobby Valentine’s tenure disappeared. Even when the team struggled this season, there were few reports of unhappy players.

Another strength is Farrell’s relationship with Ben Cherington and the front office. The friction and tension between the manager and front office that marked the end of 2011 and all of 2012 evaporated immediately. There were several articles around the time of the trade deadline this season mentioning that Farrell and Cherington were in constant communication. This synergy between the manager and front office bodes well for the future.

On the field, Farrell tends to stay away from over-managing. Jonah Keri ran a piece in August breaking down how many moves managers made during games. The only area where Farrell made more moves than other MLB managers was in lineup changes. This makes a lot of sense for the past season as much of the Red Sox regular lineup was either hurt or underperforming. He tends to stay away from sacrifice bunting and intentional walks, not too surprising giving the sabremetric bent of the Red Sox front office.

His bullpen usage has been fairly conservative during the regular season. He follows the conventions of most managers by setting roles in the bullpen and keeping his relievers in those roles. He varied this in the postseason in 2013, showing adaptability by identifying his top three relievers (Craig Breslow, Junichi Tazawa, and Koji Uehara) and relying on them heavily in high leverage situations.

It’s difficult to assign much of the blame for 2014 to Farrell. Offensive numbers for the team were down across the board. The team went from 3rd in stolen bases in the AL to 13th, due to losing Jacoby Ellsbury to free agency and Shane Victorino to injury. They were 3rd in the majors in hitting with runners in scoring position in 2013, but dropped to 27th in 2014. None of this can be pinned on John Farrell.

He will be under much more scrutiny in 2015 after a losing season. If the team gets off to a poor start, there could be calls in the media and fan base for a new direction. Farrell had the best possible results as a first year manager in 2013, but as Terry Francona can attest, Boston can be a tough town for a manager.