Could the Red Sox trade for a starter this offseason?

The Red Sox will likely seek to sign one of the top free-agent starters this winter, but they could also upgrade their rotation via trade.

Ben Cherington and the Red Sox brass are hoping to add to the team’s starting rotation this offseason–that is no secret. And with the likes of Jon Lester, Max Scherzer, and James Shields headlining this year’s free-agent class, much time has been spent speculating on just who the Red Sox will choose to pursue among the group this offseason.

Many fans, of course, have pined for Boston to finally open up its wallets and bring back Lester, while some observers view Shields as a more realistic target. But given how thin the club’s rotation depth is, Cherington would be smart to add multiple reliable starters.

Although the thought of signing both Lester and Shields is fun to dream about, that scenario is unlikely given how much money both pitchers will garner on the open market. Consequently, the Red Sox would be smart to scour any and all trade possibilities for a starting pitcher. Their much-discussed depth in the outfield and at the top levels of the minors could be used to help bring in a quality starter. 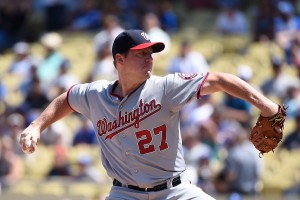 Yet just who might be available to the Red Sox on the trade market?

From one perspective, trading Zimmermann would appear to be a strange move for a Nationals team built to win now. Indeed, Zimmermann, along with Stephen Strasburg, Doug Fister, and Gio Gonzalez gives Washington one of the best rotations in baseball.

But the right-hander is entering the final year of his deal and reportedly won’t be taking a hometown discount to stay with the Nats. That leaves Washington in a tough spot considering both Bryce Harper and Stephen Strasburg will need to be extended long-term in the near future. The Nationals could just let Zimmermann walk after next season, but trading him now would allow them to get something in return for the 28-year-old.

And Zimmermann has turned into one of the more underrated pitchers in baseball. Pitching in Strasburg’s shadow, the righty has been every bit as good as his more heralded teammate over the past few seasons. In 2014, Zimmermann posted a 2.66 ERA and 2.68 FIP over 199.2 innings pitched, striking out 182 batters and walking only 29. Moreover, his velocity has stayed steady in the past three years since his recovery from Tommy John surgery, with Zimmermann improving his overall performance during that time span.

The Nats don’t have any specific needs, but a solid prospect package might just be enough to land Zimmermann if Washington chooses to move him.

The Phillies have been reluctant to deal Hamels in recent seasons, but Pat Gillick’s return to the club’s front office has changed their outlook, with Gillick and GM Ruben Amaro finally acknowledging the team is in rebuilding mode. Whether Hamels is now available is less clear, though one has to think Philadelphia would listen if Boston comes calling with an offer.

Hamels, for his part, has been one of baseball’s most consistent starters over the past seven years or so. The left-hander has thrown at least 180 innings in every season dating back to 2007 and finished off a career year in 2014, compiling a 151 ERA+ that ranked fifth-best in the NL. He is set to make $22.5 million annually over the next four seasons, which is fair market value for a pitcher of Hamels’ caliber and age (he turns 31 in December).

The Phillies, furthermore, need to get younger fast, and Boston has a plethora of young prospects from which they could choose in any potential trade for Hamels.

Ross isn’t a household name, but he has been great for the Padres over the past season and a half. The 27-year-old also has less mileage on his arm than someone like Hamels, though it must be acknowledged that much of his success has come in the pitcher-friendly environment of Petco Park.

Even still, Ross has turned into a solid starter, posting a 2.95 ERA and 3.23 FIP in 320 innings dating back to the start of 2013. Over that time, Ross’ 23.9% strikeout rate is the 15th-highest in the majors, putting him in a tie with Cliff Lee and ahead of other starters like Hamels, Lester, and Zack Greinke.

The Red Sox could also match up well with the Padres in any potential trade. San Diego is nowhere near contention and always in need of a young bat or two, and if Cherington chooses to hang onto the club’s best prospects, don’t be surprised if Ross is his target.

Many have speculated that the Reds could part with either Jonny Cueto or Mat Latos. However, Cincinnati is built to win now, and those two starters have formed a strong one-two punch at the top of the team’s rotation when healthy. The Reds picked up Cueto’s $10 million option for 2015, which makes him easy to trade, but also easy to hang onto if they so choose. Latos is probably the more likely one to be dealt, especially since he is entering the last year of his contract.  Still, with Cincinnati’s current roster, these two seem a better bet to be dealt at the trade deadline next July, rather than this winter.

The biggest name that could potentially be dealt this winter is Chris Sale. The White Sox haven’t been good for a few years, and Sale’s pedigree, age and multiple years of cost control could net Chicago a massive package in return. But the club hasn’t given any indication it wants to trade Sale, and with the AL Central beginning to grow weaker, the White Sox’s window of contention is closer than many might think. Jose Abreu gives them a viable star, and last summer’s first-round pick Carlos Rodon could be ready to contribute in the majors in 2015, giving the team the makings of a strong, young rotation. Sale is likely a couple years away from being put on the trading block.