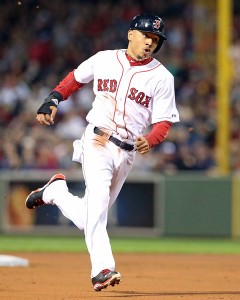 If the Red Sox were to pull off a substantial trade this offseason, it’s more than likely that Mookie Betts would need to be the centerpiece of any potential deal. After starting the season in double-A, Betts spent a short time in triple-A before getting called up to the Red Sox in late June. If breezing through two levels of the minor leagues wasn’t challenging enough, Betts also learned an entirely new position as he ascended through the Sox farm. While still with the Portland Sea Dogs, Betts began to see playing time in the outfield and continued to learn his new role on the job throughout the 2014 season. When he arrived in Boston, Mookie Madness took Red Sox Nation by storm, as the 21-year old displayed a mature approach at the plate and steady outfield defense. After the team tried multiple players in the lead-off spot, Boston finally found a steady bat with great speed to plug atop their order in Betts. While he only amassed 56 games last season, Betts managed to post a .291/.368/.444 slash, with 12 doubles and 5 home runs. In 22 games as a lead-off hitter, the former fifth round selection reached base at a .388 clip, and posted a 10/16 BB/K. Going forward, Betts seems like a keeper for both his offensive and defensive promise, and I don’t believe that anyone would have a problem if Boston held onto the youngster. Even high ranking Red Sox official Bill James seems like he’s on team Keep Mookie, judging by the projections he gave for Betts’ Sophomore season. However, the Red Sox have a ton of holes to fill this winter — some of which can’t be solved in free agency alone. Therefore, Boston will need to decide whether Mookie Betts is more valuable on their roster or off it. Outfield glut aside, Mookie’s value is probably as high as it’s ever going to be, and while 56 games doesn’t offer any conclusions, Steamer predicts a solid 2015 campaign for Betts. Conversely, along with money and roster openings, prospects is another tool that the Red Sox could use to reel in a big fish this winter. Betts, along with others, could spell the answer to Boston’s top tier pitching woes.

You're not gonna believe this, but no Red Sox won Silver Sluggers this year.