I have a confession to make: I didn’t watch Game 4 of the 2004 ALCS. I know this hurts my credibility as a diehard Red Sox fan, but I had reached a point where I just wasn’t sure whether I could deal with the emotion of a loss to the Yankees for the second straight year.

It was one of the lowest moments of my entire life as a fan. My grandfather had passed away in 1986 without seeing the Red Sox win the World Series. My dad had died in 2003 without seeing a World Series title in 55 years of being a Red Sox fan. I didn’t want that family history to continue. 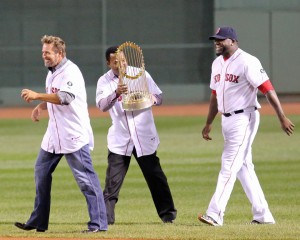 All I could think about was how 2004 was supposed to be our year. The front office added Curt Schilling and Keith Foulke to a team that had pushed the Yankees to the brink the year before. For the first time in forever, the margin between the clubs was paper thin.

Then, in three quick games, it all fell apart. Curt Schilling’s ankle injury led to a horrific Game 1 start. The prolific offense went silent in Games 1 and 2 outside of a furious rally in Game 1 that fell just short. The Red Sox were looking to bounce back in Boston, but the Yankees ripped the Red Sox pitching to shreds in Game 3.

Instead of a back and forth, nip and tuck series, it was a rout. The Red Sox were playing for pride in Game 4 and I couldn’t bear to watch.

I watched all of the ALCS that year from a fairly unique location. I was on a project in Japan, working on a United States naval base. This meant the games were during the day, so instead of late nights and lack of sleep like my wife, I had to find places that had a television on during the day. The biggest benefit was that the Armed Forces Network was using a different broadcast, so I didn’t have to suffer through the play by play of Joe Buck and Tim McCarver.

I stuck to my vow to stay away from Game 4, staying off the internet until the evening in Japan when I was sure the game was done. I read about the dramatic events of the game, and devoured Bill Simmons’ recap on ESPN. Just like that, I was back in for the rest of the series.

It’s still amazing to think about how many little things had to go right for the comeback to work. The walk that Kevin Millar took to give Dave Roberts his big chance for The Steal. Big Papi’s legendary moments. Keith Foulke pitching five scoreless innings across three consecutive games. Curt Schilling’s game six performance on one leg, and Derek Lowe’s Game 7 masterpiece on two days rest.

The most incredible to me were the two controversial calls in Game 6. In both cases (Mark Bellhorn’s home run in the 4th inning and ARod’s slap in the 8th inning) the umpires made the incorrect call initially, and then reversed it. The umpires reversed two calls, without replay, and got them both right. I had never seen that happen, and both times the Red Sox benefitted.

Despite the blowout in Game 7, that lead never felt safe to me until the throw from Pokey Reese hit Doug Mientkiewicz’ glove for the final out. The Red Sox had finally done it, had finally beaten the Yankees when it mattered. The fact that they made history to do it, becoming the first team in baseball history to come back from a 3-0 deficit, was sweet, sweet icing on the cake.

My flight back to the US left Japan on Sunday, October 24th. I was able to watch Game 1 of the World Series (played on Saturday night back in the states) before my flight left. I checked into my hotel in New Orleans Sunday night just in time to watch Game 2. I still consider it one of my greatest days as a sports fan, watching the Red Sox win two World Series games on what for me was the same day.

When the final out in Game 4 occurred, I immediately poured a glass of champagne and called my brother. We reminisced about our shared moments watching the Sox, and memories of our dad. My one regret was that I was by myself and still crazy jetlagged from my trip to Japan. Still, the champagne tasted sweet as I celebrated the victory and the greatest comeback in the history of baseball.