The Blue Jays aren’t messing around. That much became clear when they signed free-agent catcher Russell Martin to a five-year, $82.5 million contract Monday, outbidding notable heavyweights in the Cubs and Dodgers in the process.

The signing comes with its fair share of risks (as does any big-money contract, no matter the player). A year ago, Martin hit .226/.327/.377 for the Pirates, and any chance for such a lucrative contract felt unlikely at best. Then Martin hit .290/.402/.430 in 2014, helping lead Pittsburgh to a second-straight postseason berth.

His defense and leadership skills have long been praised, and Martin is also one of the best pitch framers in baseball. Toronto GM Alex Anthopoulos no doubt expects Martin to be a legitimate upgrade on incumbent catcher Dioner Navarro, who is among the league’s worst pitch framers. 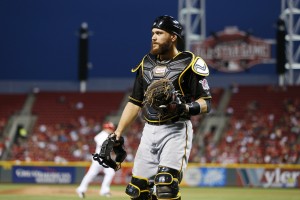 And that is what this signing is all about—improving the Blue Jays in the present. At this point in time, Anthopoulos isn’t overly concerned about what becomes of Martin in the fourth and fifth years of the contract. Much like the Red Sox, the Jays view the AL East landscape as wide open, a division that can be theirs for the taking.

The Orioles are deep and talented, but Baltimore’s pitching staff overachieved on the whole last season, and also enjoyed quite the bounce-back campaign from Nelson Cruz. Tampa Bay is now without David Price, Andrew Friedman and Joe Maddon, while the Yankees are old and growing older.

Even with all the optimism surrounding the Red Sox this offseason, moreover, this is a club coming off a 91-loss season. There is no certainty that Boston can just jump from worst to first like it did in 2013.

Anthopoulos knows all this, which makes the way Martin’s contract is structured all the more interesting. Toronto is set to pay Martin just $7 million in 2015 and $15 million in 2016 before the catcher receives $20 million annually in the final three years of the deal. So while the Blue Jays are opening up the checkbook to pay Martin, they aren’t actually committing much to him in the season ahead.

That leaves them with even more money to spend this offseason, and right at a time when WEEI’s Rob Bradford is reporting that the Jays could be a serious suitor for Jon Lester. Now Lester landing in Toronto would be an even bigger surprise than Martin, and both the Red Sox and Cubs (who have money to spend after missing out on Martin) are far likelier destinations.

Still, the point remains: Anthopoulos is looking to be far more aggressive this offseason than last winter, when the Jays found themselves in a similar situation. Toronto didn’t add much to their roster (most notably, failing to upgrade a thin starting rotation) and ultimately fell out of the playoff race down the stretch.

But if the Blue Jays can sign a mid-tier starter—say, Ervin Santana or even James Shields—their outlook becomes that much better. They will have right-hander Marcus Stroman for a full season and know they can depend on a healthy Drew Hutchison after his solid 2014 campaign. Add in Santana or another free-agent hurler, and all the sudden, Toronto’s rotation is far deeper than it ever was last season.

None of this particularly impacts the Red Sox’s offseason plans; it just gives them another contender with which to compete in the division. If Boston is as aggressive as Ben Cherington and the owners have indicated, then the Red Sox too have some upgrades of their own to make.

For their part, the Jays will still need to replace center fielder Colby Rasmus, and their fortunes will always depend on the uneven health of Jose Reyes and Jose Bautista. Yet the signing of Martin is a reminder that Toronto lurks as a serious challenger to Boston’s hopes of reclaiming AL East supremacy. The Jays can score runs, and Martin will help that pitching staff with his leadership and pitch-framing ability.

The MLB offseason has just begun, of course,  and one can’t judge Toronto simply on its addition of Martin. Their willingness to spend portends a busier winter in Toronto than in season’s past. The Red Sox, in other words, aren’t the only team looking to grab control of the division this offseason.