Friday Links: The calm before the storm? 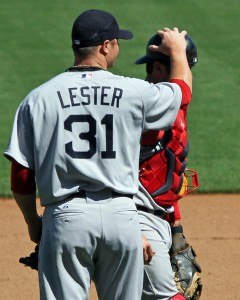 After extending an offer to Jon Lester, and hosting Pablo Sandoval earlier this week, all was quiet on Yawkey Way on Thursday. The team appears to be in holding pattern of both free agents while Lester visits other clubs, and Sandoval gauges his market. Yesterday we learned that the Toronto Blue Jays are a team very interested in Sandoval, and are viewed as a dark horse in the Kung-Fu Panda sweepstakes. Still, the Red Sox appear to be favorites to land the 28-year old third baseman, even though they have yet to make a contract offer. While no more meetings are scheduled for Sandoval as of right now, the same can’t be said for left-hander Jon Lester. With an offer from Boston in hand, the 30-year old is still set to meet with a handful of clubs interested in adding the veteran to their staff. While the Atlanta Braves and Chicago Cubs are viewed as Boston’s chief competition, ESPN analyst Curt Schilling wouldn’t be surprised if the New York Yankees jumped into the Lester bidding. The former Red Sox right-hander sent out a tweet on Thursday morning, suggesting that the Red Sox longtime rivals could offer Lester a deal worth $200M over 8 years. Of course there’s no tangible basis to Schillings tweet, but it just goes to show that the Yankees shouldn’t be treated lightly in free agency. They can throw around money with the best of them.

John Hart on #Braves meeting with Lester today: "Is it a long shot? Yeah, it's a long shot … (but) we're keeping all the doors open."